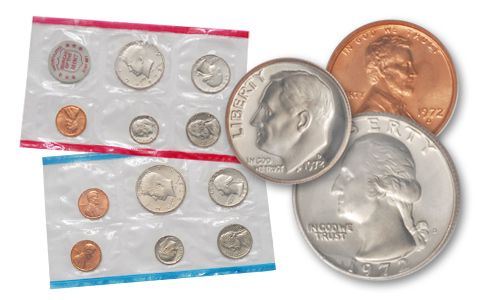 Availability: In Stock
This item will ship within 2 business days.
Item #
182895
Add to Wish List Add to Wish List Wishlist is for registered customers. Please login or create an account to continue. Add to Compare

The 1972-PDS Mint Set had a then-record mintage of 2,750,000 sets. (Doesn't this nearly perfectly rounded number seem awfully suspicious? Did the Treasury actually produce and sell exactly two and three-quarter million sets when, in every other year except 1959 and 1979, the figure was some unusually odd, yet precise, number?)

About the sets: The coins in the 1972-PDS Mint Sets were Uncirculated pieces pulled from regular production runs, thus the quality of the individual coins varies widely from set to set, and even within a set.

The 1972-PDS Mint Set contained eleven coins, including the following:

No Eisenhower Dollars were included in the official 1972-PDS Mint Sets; instead, the regular strikes were released directly into circulation. 40% Silver Clad versions of the 1972-S Eisenhower Dollar were sold individually to collectors at a premium (known as "Blue Ikes"). The coins were sealed in a flat pliofilm pack and placed in a glossy blue envelope.

President Richard Nixon was reelected in a landslide win over George McGovern. A break-in at the Watergate Hotel became a potential scandal for the Republicans.