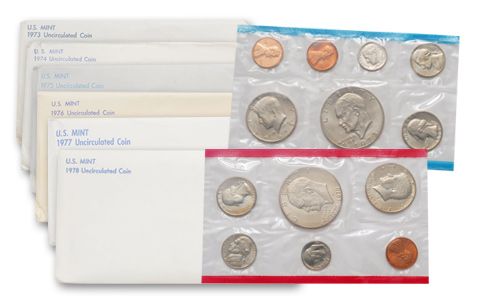 Availability: In Stock
This item will ship within 2 business days.
Item #
241436
Add to Wish List Add to Wish List Wishlist is for registered customers. Please login or create an account to continue. Add to Compare

Collectors love official U.S. Mint sets, because they have one of every coin struck for circulation. Here's your chance to get a massive mint set coin collection, including a coin from every mint struck between 1973 and 1978 - that's 74 Brilliant Uncirculated (BU) coins. You get Lincoln Cents, Jefferson Nickels, Roosevelt Dimes, Washington Quarters, Kennedy Halves and an example of every single Ike Dollar released for circulation, including the 1973 Ike only found in this set and the Bicentennial coins from 1975-76. Each set comes in official government packaging. An instant collection for only $1.08 a coin!