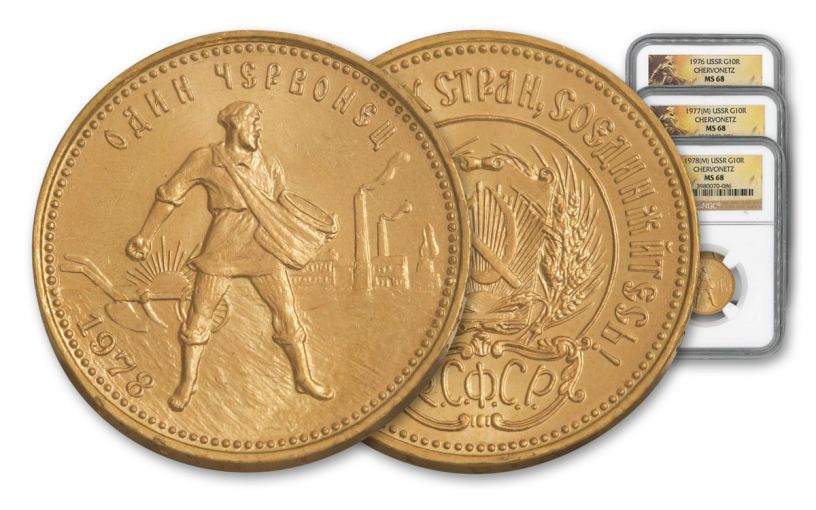 Availability: Call-In Only
This item is only available on a Call-In basis. Please call 1-800-510-6468 to speak to a representative.
Item #
317725
Add to Wish List Add to Wish List Wishlist is for registered customers. Please login or create an account to continue. Add to Compare

Get Your Piece of Gorbachev's Cold War Gold!

After the Russian Revolution, Lenin boasted that the only use for gold would be to make bathroom fixtures, but Soviet Russia very quickly changed course and minted its first Chervonetz Gold coins in the 1920s. The coin features a Russian farmer sowing grain with a factory in the background. Each coin is almost exactly a quarter ounce of pure gold. Loosely translated Chervonetz means "red coin," and refers to the high purity of gold which often gives the coins a shimmering red hue.

Mysteriously, Russia stopped minting Chervonetz gold in the 1920s, and even more mysteriously began minting them again between 1975 and 1982. Through those years, the USSR struck just 6.565 million coins, each in .2489 ounces of 90% gold. Perhaps a reason for this relatively small number is because this coin was never intended to circulate within the Soviet Union itself. At the time, the Soviets were experiencing the harsh economic times that often accompany political and social upheaval. And so the Chervonetz was intended for sale abroad, with the desperate hope of bringing new wealth into the Soviet Union.

The biggest mystery of all is what happened to those coins. No one really knows, but until recently only 724 Gold Chervonetz coins were graded at Professional Coin Grading Service (PCGS) and Numismatic Guaranty Corporation (NGC) combined—only 724 coins out of nearly 7 million minted – the last Gold 10 Roubles coin struck by the Soviet Union!

A few months ago, a small previously unknown hoard surfaced, with each coin in pristine condition. We've never seen anything like this Chervonetz Gold Hoard -- its historic significance cannot be understated! We're pleased to offer you a 1976-1978 three-piece set of the last three years10 Roubles Chervonetz coins were struck. Plus, each coin has been certified and graded by the Numismatic Guaranty Corporation (NGC) to be in stunning Mint State-68 (MS68) condition, meaning that each is an exceptional coin with sharp strikes, full original luster, and no hairlines or scuff marks. NGC has graded only 16 coins higher from all three years combined! Your set will come beautifully displayed in a walnut presentation box and accompanied by a certificate of authenticity.

Owning historic gold coins of this quality is an opportunity few collectors will ever have – and you are now among that elite group. Grab Gorbachev's gold for your collection!

You can own your very own set of Cold War-era Russian gold by securing a three-piece set of some of the finest Gold Chervonetz coins in the world.