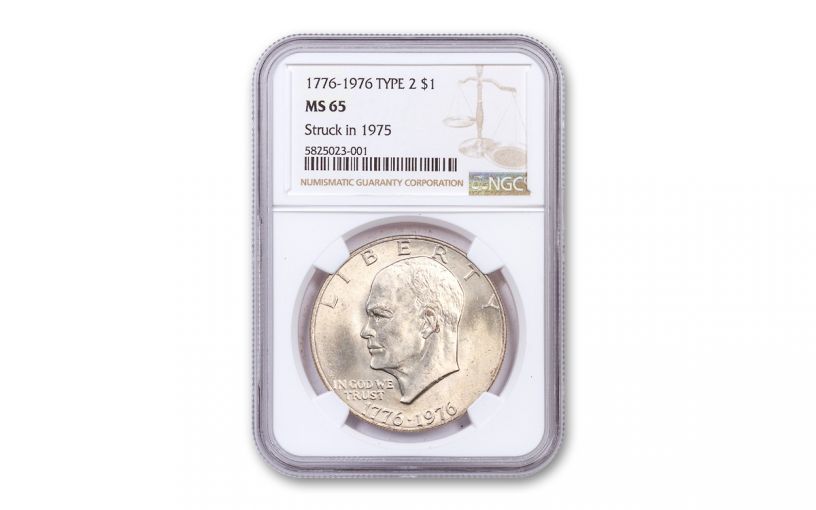 Availability: Out of Stock
This item is currently Out of Stock. Please sign up to be notified if this product becomes available.
Item #
356952
Add to Wish List Add to Wish List Wishlist is for registered customers. Please login or create an account to continue. Add to Compare
Product Description

Bicentennial Ike Dollars From a Hoard of 1975-Dated Bags

In 1975 and 1976, the United States Mint released special Bicentennial Eisenhower Dollars to mark our nation’s 200th birthday. There was just one catch: The Bicentennial design used the dual date of 1776-1976 in honor of the nation’s 200th anniversary – and no Ike Dollars were ever struck with a 1975 date! Though millions of Eisenhower Dollars were minted in 1975 it’s nearly impossible for collectors to tell if their coins were struck in 1975 or 1976…. until now!

The story begins in 1975 when a family caught up in the “Bicentennial Fever” of the day, purchased five full bags – 5,000 coins in all – upon the release of these coins and simply stashed them away. Now, more than four decades later, those coins have finally come to light and are making it possible for collectors to fill an important hole in their “Ike” Dollar collections.

How is that possible? Simple: Each U.S. Mint bag was labeled with a big, bold “1975” stamp. To get a jump on the bicentennial celebration, the mint elected not to strike ANY 1975-dated Ike dollars, choosing instead to strike the special anniversary dollars in both 1975 and 1976. Thanks to the date on the bags, we can confirm that these coins were actually struck in 1975!

When these bags were finally opened, the Numismatic Guaranty Corporation (NGC) was there to oversee the process. After a careful examination, NGC has sonically sealed each coin in an acrylic capsule with an exclusive “Struck in 1975” label, giving each coin a unique pedigree that attests to its 1975 year date! What’s more, each coin available in this offer has been graded to be in Gem Uncirculated Mint State-65 (MS65) condition with full mint luster and sharp eye appeal.

Minted only from 1971 to 1979, the Eisenhower Dollar is one of our nation’s shortest-lived series. In addition to a portrait of President Dwight David Eisenhower on the its obverse, the coin’s reverse design normally displayed a styled version of the Apollo 11 mission patch. But for the nation’s 200th birthday, a design contest was held for a one-time-only reverse design. The new design was created by 22-year-old art student Dennis Williams and depicted the Liberty Bell superimposed before an image of the moon. The U.S. Mint’s Chief Engraver Frank Gasparro created a Type II version of the coin when he modified the lettering later in 1975 to improve the coin’s striking quality.

When this incredible hoard was announced, we snatched them up as quickly as we could. Each coin was struck at the Philadelphia Mint and is of the Type II variety. More importantly, these Brilliant Uncirculated (BU) Bicentennial Eisenhower Dollars are guaranteed to have come from a 1975-dated U.S. Mint bag! The temporary design, dual dates of 1776 and 1976, and no-bones-about-it 1975 date make this a coveted piece that belongs in every U.S. coin collection! Grab one – or several – now while our supply lasts!