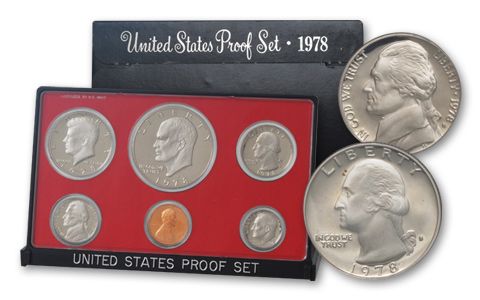 Availability: In Stock
This item will ship within 2 business days.
Item #
222246
Add to Wish List Add to Wish List Wishlist is for registered customers. Please login or create an account to continue. Add to Compare

Though it is the last Proof Set to contain an Eisenhower Dollar (which is also the last full-sized Dollar produced by the U.S. Mint), the 1978-S Proof Set remains affordable. However, expect this to change over time, as more and more sets are broken up for individual, high-quality examples and for the Proof-only coins that make up this set.

About the sets: Beginning in 1978, all Proof coins were struck with Cameo or Deep Cameo Finishes.

Original packaging: The individual coins of the 1978-S Proof Set were sealed in a two-piece, clear plastic case. Raised rings of plastic separated the coins from each other, and a red, felt-covered paper insert was added for visual impact. The clear plastic case containing the coins was inserted into a molded, black plastic frame with raised silver letters UNITED STATES PROOF SET, and a hinged flap that could be flipped over for display purposes. A black card cover imprinted with silver letters, "United States Proof Set • 1978" protected both the case and the frame.