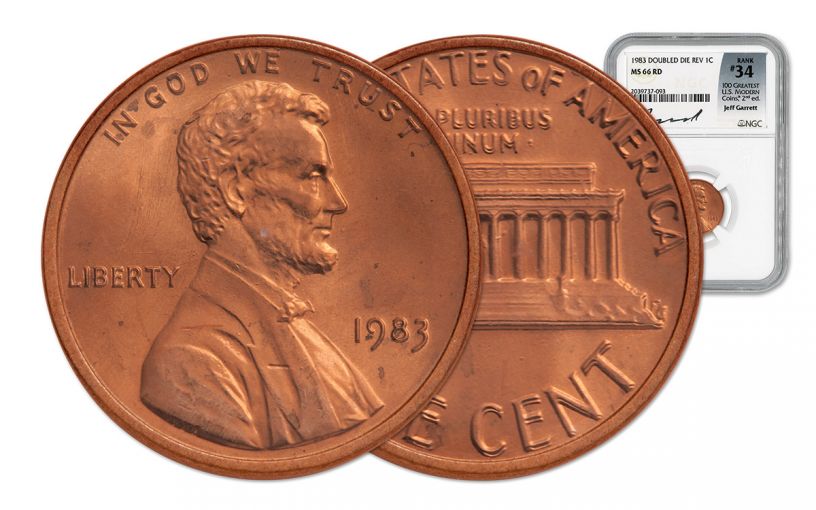 Availability: Call-In Only
This item is only available on a Call-In basis. Please call 1-800-510-6468 to speak to a representative.
Item #
250765
Add to Wish List Add to Wish List Wishlist is for registered customers. Please login or create an account to continue. Add to Compare

The Most Prominent Doubled Die Reverse in the Lincoln Set Series, and One of Jeff Garrett's "100 Greatest U.S. Modern Coins!"

According to numismatist and author Jeff Garrett, the 1983 Doubled Die Reverse Lincoln cent is the most dramatic of any doubled-die reverse (DDR) in the entire Lincoln cent series, with prominent, well-separated doubling throughout all of the reverse legends. It's also very difficult to come by -- in 1984, U.S. Mint Assistant Director for Technology George Hunter stated that only about 5,000 entered circulation before the error was discovered and the die destroyed. Now, imagine how many of those 5,000 were ignored, wearing down over time, and you'll see why Garrett listed it as #34 in his book, 100 Greatest U.S. Modern Coins, 2nd Edition. Get yours graded in amazing Mint State-66 (MS66) by Numismatic Guaranty Corporation (NGC) with Jeff Garrett's hand-signed label!
Product Details
Related Articles
Applied promo