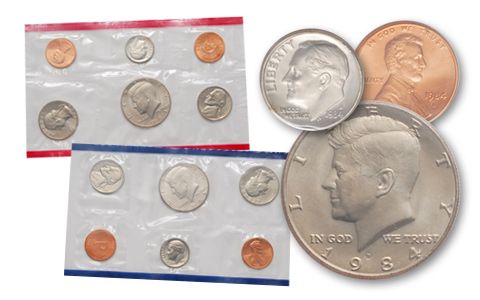 Availability: In Stock
This item will ship within 2 business days.
Item #
182906
Add to Wish List Add to Wish List Wishlist is for registered customers. Please login or create an account to continue. Add to Compare

Production of traditional Mint Sets resumed in 1984 to a lukewarm reception. Sales were off by more than a million sets from 1981. This set is the first Mint Set issued in the new colorful packaging which has changed every year since.

About the sets: The coins in the 1984-PD Mint Sets were Uncirculated pieces pulled from regular production runs, thus the quality of the individual coins varies widely from set to set, and even within a set.

The 1984-PD Mint Set contained ten coins, including the following:

Original packaging: The 1984-PD Mint Set consisted of two pliofilm packs. The first one contained the Philadelphia Mint coins and a Cent-sized token with a large "P" (for Philadelphia), while the second pack contained coins from the Denver Mint, plus a token with a large letter "D." The pack containing the D-Mint coins was edged in red; the pack containing the P-Mint coins was edged in blue. The two pliofilm packs were then sealed in an officially inscribed, colorful mailing envelope.

The Indian Prime Minister, Indira Gandhi, was killed by two of her body-guards, sparking anti-Sikh riots. More than 2,000 people died in India after a toxic gas leak from a Union Carbide chemical plant.