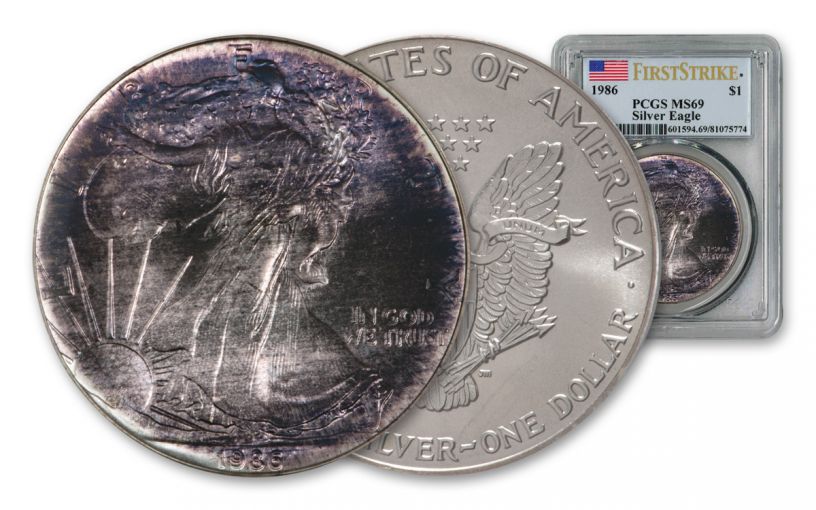 Availability: Call-In Only
This item is only available on a Call-In basis. Please call 1-800-510-6468 to speak to a representative.
Item #
336038
Add to Wish List Add to Wish List Wishlist is for registered customers. Please login or create an account to continue. Add to Compare

In 1986, numismatic history was made when the U.S. Mint released the first-ever American Eagle Silver Dollars. In the 30-plus years since, these coins have gone on to become one of the most widely collected silver coins in the world. And this is where it all started!

What we have for you here is nothing short of extraordinary: some of the ONLY first-year Silver Eagles to have received a First Strike (FS) designation from the Professional Coin Grading Service (PCGS). Their existence is due entirely to chance. In 1986, third-party grading wasn’t nearly as common as it is today. But 30 years later, an inexplicably unopened box of 1986 Silver Eagles surfaced! Even more incredible, the box included a card verifying their strike date as December 1, 1986 – placing them among the first Silver Eagles to ever be struck!

Not only have we amassed a small cache of these first-year Silver Eagles designated as First Strike coins by PCGS, but unlike other coins from that fabled unopened box, each features stunning, unique toning, making each piece unlike any other Silver Eagle in history. This coin bears a serial number of #81154424 for its unique toning. In addition to this beautiful violet toning, each comes graded by PCGS as near-perfect Mint State-69 (MS69) condition! Finally this coin features a label personally hand-signed by John Mercanti, 12th Chief Engraver of the U.S. Mint and the designer of the Silver Eagle reverse! Secure yours today!

Here’s your chance to get the U.S. Mint’s highly coveted first-year 1986 One-Ounce $1 Silver Eagle graded by PCGS as being a beautifully toned specimen graded in near-flawless Mint State-69 First Strike condition. Add it to your cart right now!