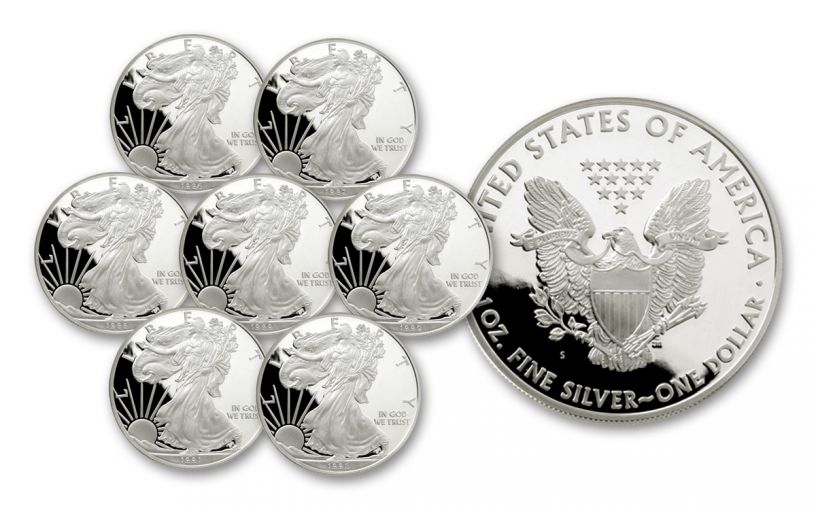 Availability: Out of Stock
This item is currently Out of Stock. Please sign up to be notified if this product becomes available.
Item #
341670
Add to Wish List Add to Wish List Wishlist is for registered customers. Please login or create an account to continue. Add to Compare

First issued in 1986, the American Eagle Silver Dollar is perhaps the most widely collected silver coin in the world – and the epitome of that coin is the Silver Eagle Proof. This set brings together the first seven years of this coveted coin, all struck at the San Francisco Mint. Collectors crave “firsts,” and this set brings together the first seven Proof coins of the series, dated from 1986 until 1992! Why seven? Because in 1993, production of the Silver Eagle Proof moved to the Philadelphia Mint. That makes this a complete set -- the goal of every elite collector – with an awesome San Francisco Mint American Silver Eagle Proof Collection.

What’s more, Proof coins are the apex of the minter’s art. You’ll marvel at their frosty designs and mirrored fields, as well as the knowledge that you’ve managed to secure the first seven dates ever struck! Proof American Silver Eagles are also much scarcer than their Brilliant Uncirculated (BU) counterparts. How much scarcer? Based on mintages form the inception of the Silver Eagle program in 1986, The Mint has struck 24 times MORE Brilliant Uncirculated Silver Eagles, making Proof coins not only the height of coin perfection, but more limited and sought-after as well – and these first several years are the most desirable of all!

There’s no better way to start, complete or add to your American Silver Eagle collection than by securing the very first seven years of the series in gorgeous Proof condition! This is a tremendous opportunity at a price that won’t break the bank!