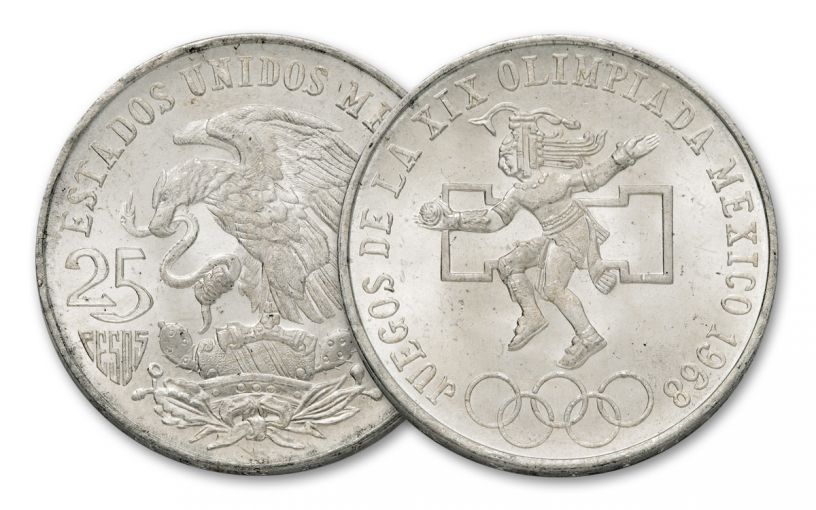 Availability: Out of Stock
This item is currently Out of Stock. Please sign up to be notified if this product becomes available.
Item #
222574
Add to Wish List Add to Wish List Wishlist is for registered customers. Please login or create an account to continue. Add to Compare

The 1968 Mexico City Olympic Summer Games were filled with controversy. Before the Games even started they were boycotted by UCLA basketball superstar Kareem Abdul-Jabbar (then known as Lew Alcindor). Then during the heat of the games, U.S. Olympic medal-winning sprinters Tommie Smith and John Carlos held black gloves high on the medal podium in solidarity with the “Black Power” movement of the 1960s. The salute seems tame now, but it shocked the world when it happened half a century ago.

But there’s no controversy about this 25 Peso silver coin issued by Mexico to commemorate the games. It’s a big 38 mm coin and contains more than half an ounce of fine silver. The coin shows an Aztec ballplayer dancing above the Olympic rings.  This wonderful coin would be a popular coin in its own right because it is an official Olympic coin, but what makes it even more unique is that it was the ONLY coin struck by host country for that year’s Olympic Games! Compare that with today’s Olympic coins series that feature dozens of designs and precious metals. Plus, each coin is graded in in Almost Uncirculated condition with only a small trace of wear visible on its highest points

Every Olympic Games enthusiast wants this coin – don’t miss the starting gun, make sure you get your coin today!