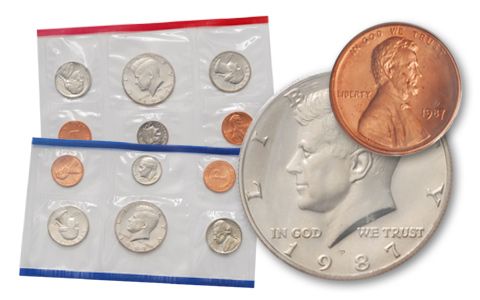 Availability: In Stock
This item will ship within 2 business days.
Item #
182909
Add to Wish List Add to Wish List Wishlist is for registered customers. Please login or create an account to continue. Add to Compare

About the sets: The coins in the 1987-PD Mint Sets were Uncirculated pieces pulled from regular production runs, thus the quality of the individual coins varies widely from set to set, and even within a set.

The 1987-PD Mint Set contained ten coins, including the following:

Original packaging: The 1987-PD Mint Set consisted of two pliofilm packs. The first one contained the Philadelphia Mint coins and a Cent-sized token with a large "P" (for Philadelphia), while the second pack contained coins from the Denver Mint, plus a token with a large letter "D." The pack containing the D-Mint coins was edged in red; the pack containing the P-Mint coins was edged in blue. The two pliofilm packs and a card listing the specifications for each coin were then sealed in an officially inscribed, colorful mailing envelope.