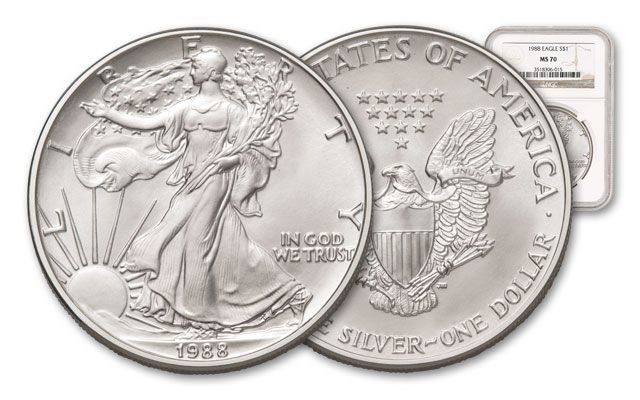 Availability: Out of Stock
Discontinued Product
Item #
227338
Add to Wish List Add to Wish List Wishlist is for registered customers. Please login or create an account to continue. Add to Compare

America’s finest silver is displayed in all its glory with the 1988 American Eagle Silver Dollar. Every year savvy buyers stash these away. Each is struck in one ounce of 99.9% fine silver and graded in flawless Mint State-70 (MS70) condition. Grading service varies.

About the 1988 American Silver Eagle:
The 1988 Silver Eagle was the third mintage for the popular American Silver Eagle series. Now that silver had been readily available to investors for three years, demand for precious metals had subsided slightly, causing the U.S. Mint to reduce the size of the mintage. Demand for silver—and thus mintage volume of Silver Eagles—would remain relatively stable for the remainder of this decade and well into the next.

The obverse of the 1988 Silver Eagle features the classic "Walking Liberty" image by American sculptor Adolph A. Weinman. Clothed in a flowing gown embossed with stars, Liberty is depicted moving confidently toward a rising sun, symbolizing American optimism.

On the reverse face of 1988 Silver Eagle coins is an image by John Mercanti, Chief Engraver at the U.S. Mint. Based on the Great Seal of the United States, the design features a bald eagle in a formal heraldic pose, its breast covered with a shield. Its talons clutch an olive branch and sheaf of arrows, and in its beak is a banner inscribed with "E PLURIBUS UNUM"—"Out of many, one."

The 1988 Silver Eagle is popular choice among collectors and investors alike. Unlike most bullion coins, American Silver Eagles are non-reportable, assuring privacy, safety and security.

In fact, American Silver Eagle bullion coins are a highly secure, liquid and convenient way to own pure silver! They're also the ONLY silver bullion coins guaranteed by the U.S. Government for weight and purity.