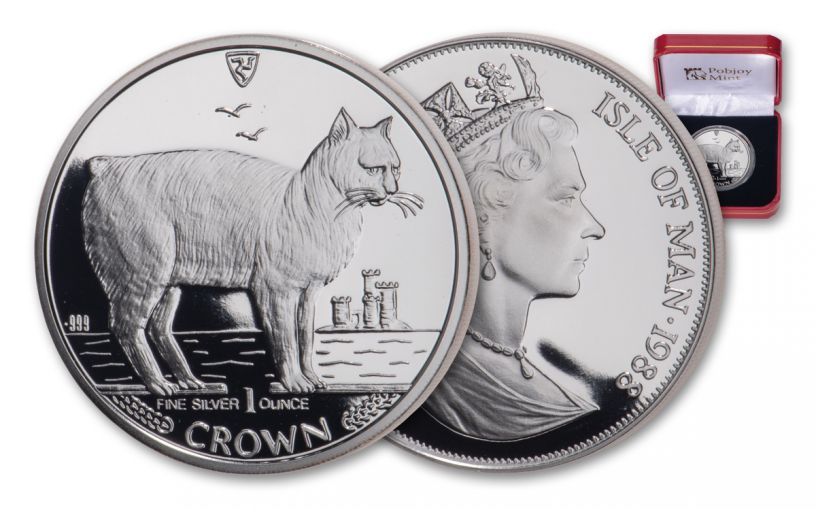 Availability: Out of Stock
This item is currently Out of Stock. Please sign up to be notified if this product becomes available.
Item #
344107
Add to Wish List Add to Wish List Wishlist is for registered customers. Please login or create an account to continue. Add to Compare

Now you can add the very first coin in the series to your collection with this 1988 Isle of Man Manx Cat Silver Proof. Struck in a Troy ounce of highly-pure 99.9% silver, this legal-tender coin bears a denomination of 1 Crown and celebrates the animal that is recognized as the national symbol of the Isle of Man. Expertly crafted by the artisans at the Pobjoy Mint, the coin’s proof finish is the result of hand-selected planchets, polished dies and multiple strikes to produce beautifully frosted details rising over mirror-like fields.

The origins of this domesticated cat native to the Isle of Man are steeped in mystery. Biblical references abound, as do tales of felines swimming ashore from shipwrecked Spanish Galleons. Instantly recognizable for having only a small stub of a tail, the Manx is the product of genetics with a naturally occurring mutation that shortens the tail. While most cats need their tails for balance when running, the Manx is perfectly fine without it. Perhaps having no tail has affected its personality – Manx owners say their cats will go on walks and, unlike other cats, like to swim.

There are only a limited quantity of 1988 Manx Cat coins left in the Pobjoy Mint’s vaults. Once they are gone, no more will be struck – ever. Don’t miss out, order yours now!