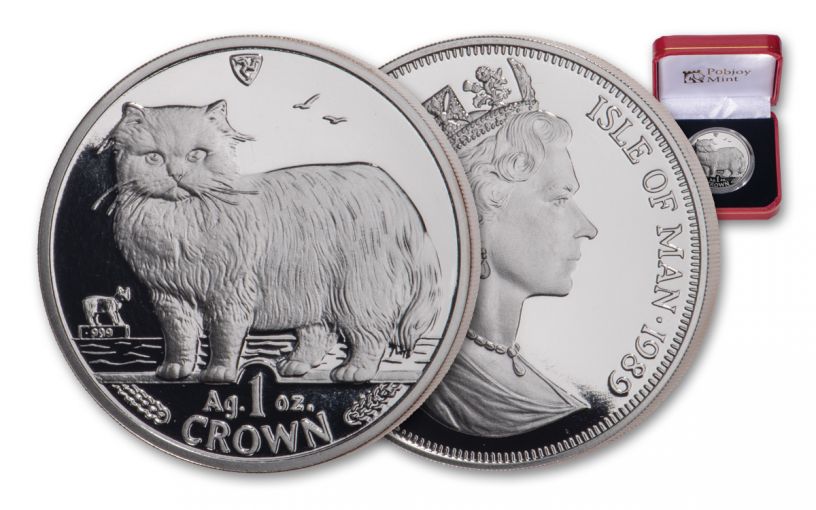 Availability: Out of Stock
This item is currently Out of Stock. Please sign up to be notified if this product becomes available.
Item #
344108
Add to Wish List Add to Wish List Wishlist is for registered customers. Please login or create an account to continue. Add to Compare

Now you can add the key-date second year coin in the series to your collection with this 1989 Isle of Man Persian Cat Silver Proof. Struck in a Troy ounce of highly-pure 99.9% silver, this legal-tender coin bears a denomination of 1 Crown and celebrates the unquestioned “supermodel” princess of the cat world. Expertly crafted by the artisans at the Pobjoy Mint, the coin’s proof finish is the result of hand-selected planchets, polished dies and multiple strikes to produce beautifully frosted details rising over mirror-like fields.

Thanks to their round faces and short muzzles, Persian Cats are often thought of as being snooty and stuck-up. Appearances can be deceiving, however, as the long-haired Persian is one of the most popular cat breeds in the world both for its elegant good looks and its sweet, gentle personality. As their name implies, these cats originated in Persia and Iran and it is supposed that they made their way westward in dusty caravans that brought rare spices, silks and jewels to Europe. Using every bit of their feline charm, Persians have ingratiated themselves into the hearts of cat-lovers around the world by assuming the mantle of being the ultimate lap cat.

There are only a limited quantity of 1989 Persian Cat coins left in the Pobjoy Mint’s vaults. Once they are gone, no more will be struck – ever. Don’t miss out, order yours now!