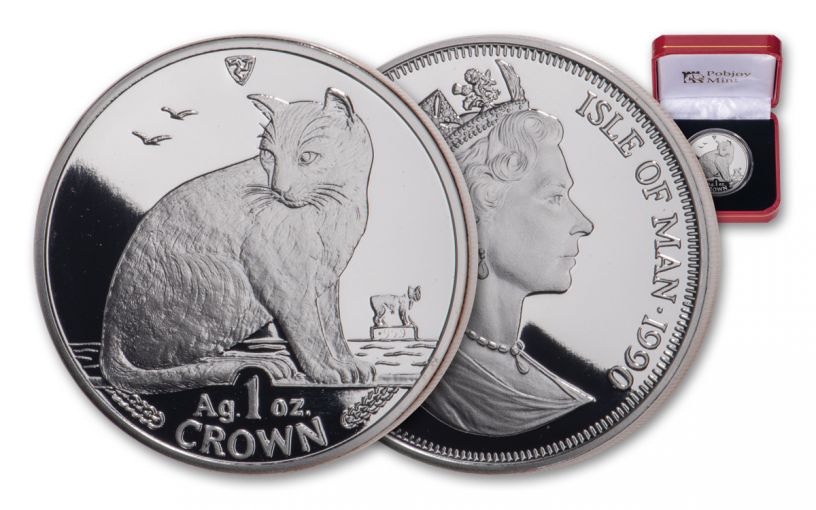 Availability: Out of Stock
This item is currently Out of Stock. Please sign up to be notified if this product becomes available.
Item #
344109
Add to Wish List Add to Wish List Wishlist is for registered customers. Please login or create an account to continue. Add to Compare

Now you can add the key-date third year coin in the series to your collection with this 1990 Isle of Man Alley Cat Silver Proof. Struck in a Troy ounce of highly-pure 99.9% silver, this legal-tender coin bears a denomination of 1 Crown and celebrates the plucky nature of one of life’s greatest survivors: The Alley Cat. Expertly crafted by the artisans at the Pobjoy Mint, the coin’s proof finish is the result of hand-selected planchets, polished dies and multiple strikes to produce beautifully frosted details rising over mirror-like fields.

They may have mixed ancestry and they may have no home but what they do have is the ability to adapt to anything life throws at them. They’re Alley Cats and they have become famous in New York City, London and other large metropolitan areas for their ability to adapt to the hazards and pressures of big-city life better than practically any other animal – including humans! Anyone who has ever seen the popular “Top Cat” cartoon series or been to a performance of the Tony Award-winning musical Cats knows that these feline troopers are adept at melting the hearts of people in their neighborhood so that they never go long without a good meal and a kindly pat on the head.

There are only a limited quantity of 1990 Alley Cat coins left in the Pobjoy Mint’s vaults. Once they are gone, no more will be struck – ever. Don’t miss out, order yours now!