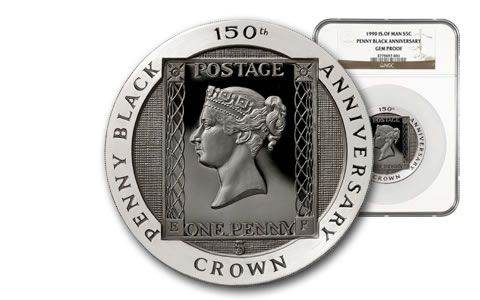 Availability: Out of Stock
Discontinued Product
Item #
246091
Add to Wish List Add to Wish List Wishlist is for registered customers. Please login or create an account to continue. Add to Compare

Coins and stamps rarely make front-page headlines, but on May 1, 1840, Great Britain introduced the world to postage stamps by issuing the "Penny Black" stamp, with a value of one penny. It shows a young Queen Victoria and was an instant hit with the public. 150 years later, in 1990, this five-ounce 99.9% silver proof coin was issued to celebrate the anniversary of the Penny Black stamp. At the Coin of the Year Awards in 1990, this design walked off with an unprecedented three awards, including "Coin of the Year." Only 5,000 1990 Five-Ounce Penny Black Silver Proofs were struck. Each proof comes with a certificate of authenticity and is graded Gem proof by Numismatic Guaranty Corporation (NGC). Your coin also comes in a wooden presentation case. We expect our small supply to disappear fast, so don't let anyone cut in line ahead of you.