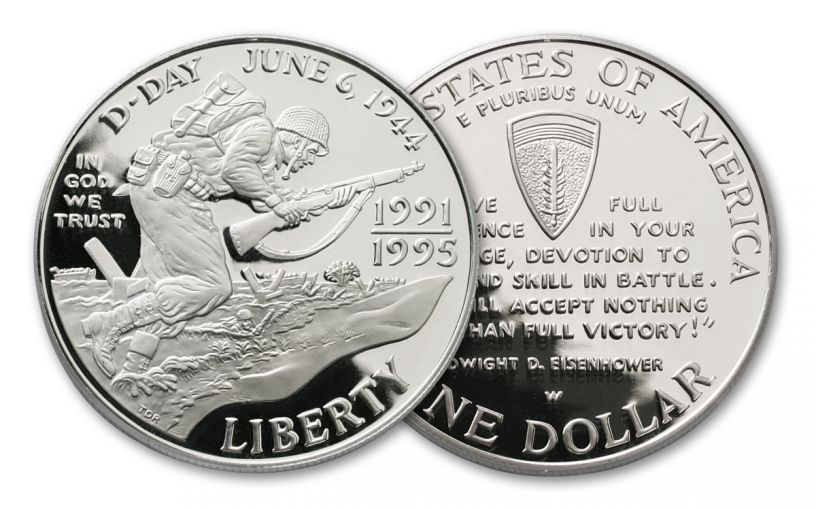 Availability: Available for Order
This item will ship 02/19/20
Item #
341871
Review this product
Add to Wish List Add to Wish List Wishlist is for registered customers. Please login or create an account to continue. Add to Compare
Complete your collection with one of these:
Product Description

During the World War II years of 1941-1945, America sent her young men to fight in battles in the South Pacific, Europe, Africa and even Alaska. On the home front, citizens planted victory gardens, rationed goods, bought war bonds, and held scrap metal drives – all while Rosie the Riveter proved that yes, she COULD do it!

To prepare for the 50th Anniversary of the end of World War II, the U.S. Mint released this commemorative silver dollar in 1993 with a dual date of 1941 and 1945 to mark the period of America’s involvement in the conflict. Struck in 90% silver, the legal-tender coin is bursting with symbolism. Designed by U.S. Mint sculptor-engraver Thomas D. Rogers, Sr., it shows an American soldier on the beach at Normandy on the obverse with the dual dates of 1991 and 1995. The coin’s the reverse depicts the shoulder sleeve insignia of the Supreme Headquarters Allied Expeditionary Force (SHAEF), with a quotation from General Dwight Eisenhower made to the troops before the D-Day assault on Normandy on June 6, 1944.

Pay tribute to the sacrifices made by the veterans of WWII with the 1991-1995-W World War II 50th Anniversary Silver Commemorative Proof. Click one to your cart today!