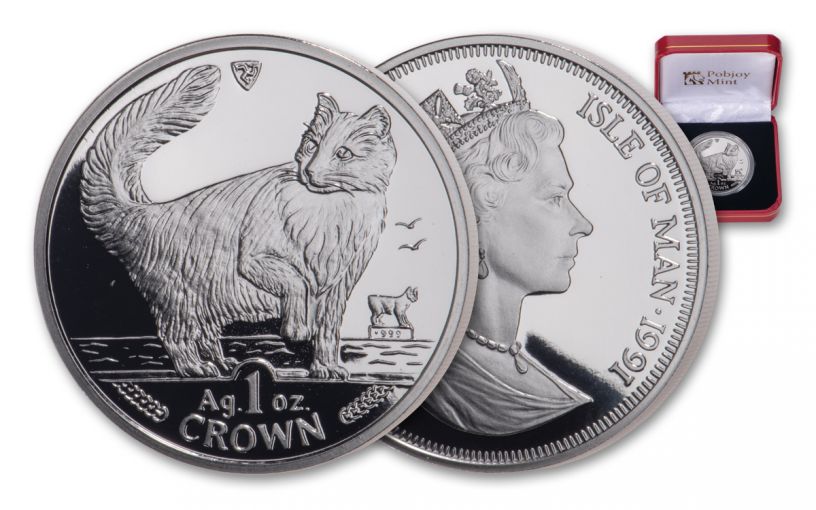 Availability: Out of Stock
This item is currently Out of Stock. Please sign up to be notified if this product becomes available.
Item #
344110
Add to Wish List Add to Wish List Wishlist is for registered customers. Please login or create an account to continue. Add to Compare

Now you can add the key-date fourth year coin in the series to your collection with this 1991 Isle of Man Norwegian Cat Silver Proof. Struck in a Troy ounce of highly-pure 99.9% silver, this legal-tender coin bears a denomination of 1 Crown and celebrates a cat bred especially for the cold winters of Scandinavia: The Norwegian Cat. Expertly crafted by the artisans at the Pobjoy Mint, the coin’s proof finish is the result of hand-selected planchets, polished dies and multiple strikes to produce beautifully frosted details rising over mirror-like fields.

Famed for its strength, intelligence and thick woolly coat, the Norwegian Forest Cat is a uniquely Scandinavian species steeped in the enchantment of ancient Norse legends. Brought to Norway around 1000 AD by the Vikings, the Norwegian Cat is described as courageous and always on the alert. This breed is not only larger than an average cat but also has a lot of energy and demands a lot of attention – especially from people they like. They are swift and effective hunters with claws so strong that they are able to climb rocks. Powerful and rugged, the Norwegian Forest Cat is equally at ease inside lounging on their favorite person’s lap.

There are only a limited quantity of 1991 Norwegian Cat coins left in the Pobjoy Mint’s vaults. Once they are gone, no more will be struck – ever. Don’t miss out, order yours now!