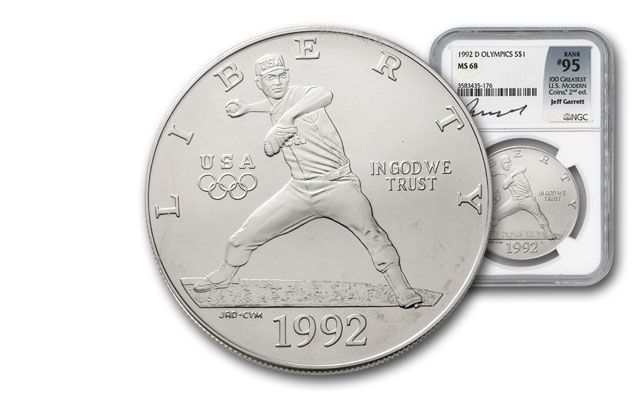 Availability: Out of Stock
This item is currently Out of Stock. Please sign up to be notified if this product becomes available.
Item #
251574
Add to Wish List Add to Wish List Wishlist is for registered customers. Please login or create an account to continue. Add to Compare

First Ever Edge Lettering on this 1992 Olympic Baseball Commemorative

In 1992, the U.S. Mint released a special commemorative to honor the Olympic Games. Struck at the Denver Mint, the coin features a baseball player winding up to throw a pitch. This is the first commemorative coin issue to be struck by the United States that features edge lettering. "XXV Olympiad" is written four times around the coin's edging.

This unique first-ever edge lettering status earned this Silver Dollar a place on the 100 Greatest U.S. Modern Coins list. Compiled by Jeff Garrett and Scott Schechter, these 100 coins consist of many unique and coveted characteristics that collectors strive to own. Some of these coins are scarce and unique doubled-die issues, first year issue coins, small mintage issues, reverse proof issues, and many, many more. This is designated on the certification.

Each coin is authenticated and certified by Numismatic Guaranty Corporation (NGC), one of the leading third-party coin grading services in the world and includes the hand-signed signature of Jeff Garrett, one of the foremost experts in numismatics and the author of several widely trusted numismatic books including the 100 Greatest U.S. Modern Coins.