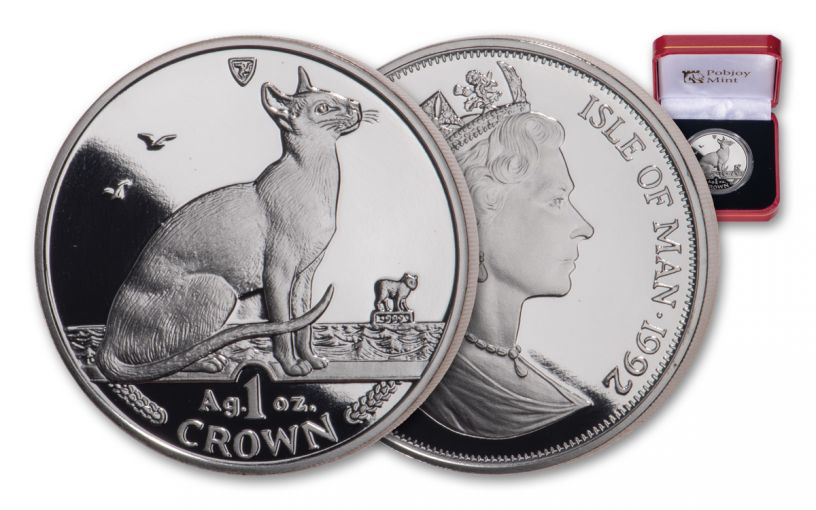 Availability: Out of Stock
This item is currently Out of Stock. Please sign up to be notified if this product becomes available.
Item #
344111
Add to Wish List Add to Wish List Wishlist is for registered customers. Please login or create an account to continue. Add to Compare

Now you can add the key-date fifth year coin in the series to your collection with this 1992 Isle of Man Siamese Cat Silver Proof. Struck in a Troy ounce of highly-pure 99.9% silver, this legal-tender coin bears a denomination of 1 Crown and celebrates the oriental beauty of the Siamese Cat. Expertly crafted by the artisans at the Pobjoy Mint, the coin’s proof finish is the result of hand-selected planchets, polished dies and multiple strikes to produce beautifully frosted details rising over mirror-like fields.

Instantly recognizable for its blue, almond-shaped eyes and triangular-shaped head, the Siamese Cat first made its way west more than a century ago as a gift to the English consulate general in Bangkok from the King of Siam (now Thailand). With its slender, elongated and muscular body, the Siamese Cat possesses a regal disposition. Siamese Cats are one of the oldest breeds of domesticated cats in the world and are noted as being highly inquisitive creatures that save all their affection for just one human companion. According to legend, these felines were temple cats that perched on tall columns around the throne and would jump onto people and scratch their faces if they threatened the king.

There are only a limited quantity of 1992 Siamese Cat coins left in the Pobjoy Mint’s vaults. Once they are gone, no more will be struck – ever. Don’t miss out, order yours now!