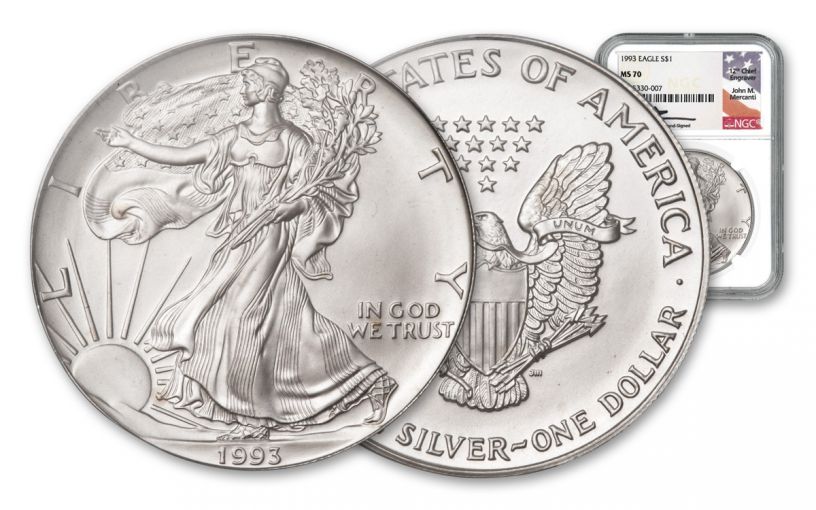 Availability: Call-In Only
This item is only available on a Call-In basis. Please call 1-800-510-6468 to speak to a representative.
Item #
337913
Add to Wish List Add to Wish List Wishlist is for registered customers. Please login or create an account to continue. Add to Compare
Related Articles
Product Description

The answer lies in its pedigree. First, it comes certified and graded by the Numismatic Guaranty Corporation (NGC) as being in flawless Mint State-70 (MS70) condition, a distinction that means your perfectly graded coin will have ZERO imperfections – showing all features and fields exactly as the engraver and mint intended. Second, it comes sonically sealed in a protective display holder with a label personally hand-signed by John Mercanti, 12th Chief Engraver of the U.S. Mint and the designer of the coin’s beautiful heraldic eagle reverse!

According to the NGC population report at the time of this writing, only 262 American Silver Eagles struck in 1993 have been graded as being perfect Mint State-70 condition. And of those, just nine have been encapsulated with a Mercanti hand-signed label!

The Silver Eagle is considered one of, if not the, most collected coin worldwide. And if you collect these coins, this may very well be your holy grail – and we’ve managed to secure two of the only nine known to exist. Get one or both for your collection and order immediately!

Don’t miss your opportunity to add this extremely scarce American Silver Eagle to your collection. Click it to your cart right now!