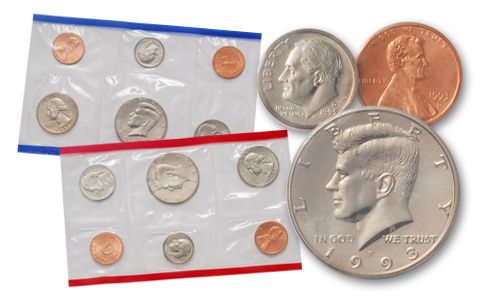 Availability: Out of Stock
This item is currently Out of Stock. Please sign up to be notified if this product becomes available.
Item #
182915
Add to Wish List Add to Wish List Wishlist is for registered customers. Please login or create an account to continue. Add to Compare

The price of the 1993 Mint Sets was raised to $8.00 (up a dollar), killing off some sales and dropping the mintage to just under 1.3 million sets.

About the sets: The coins in the 1993-PD Mint Sets were Uncirculated pieces pulled from regular production runs, thus the quality of the individual coins varies widely from set to set, and even within a set.

The 1993-PD Mint Set contained ten coins, including the following:

Original packaging: The 1993-PD Mint Set consisted of two pliofilm packs. The first one contained the Philadelphia Mint coins and a Cent-sized token with a large "P" (for Philadelphia), while the second pack contained coins from the Denver Mint, plus a token with a large letter "D." The pack containing the D-Mint coins was edged in red; the pack containing the P-Mint coins was edged in blue. The two pliofilm packs and a card listing the specifications for each coin were then sealed in an officially inscribed, green mailing envelope.

Terrorists bombed the World Trade Center, but failed to cause any extensive damage. Federal authorities raided the Branch Davidian compound in Waco, Texas, ending in the deaths of 72 cult members. Marc Andreeson (later of Netscape fame) developed Mosaic, allowing users to navigate through the World-Wide Web.

The European Union was created. Israel and the Palestinians signed the Oslo Peace Agreement.