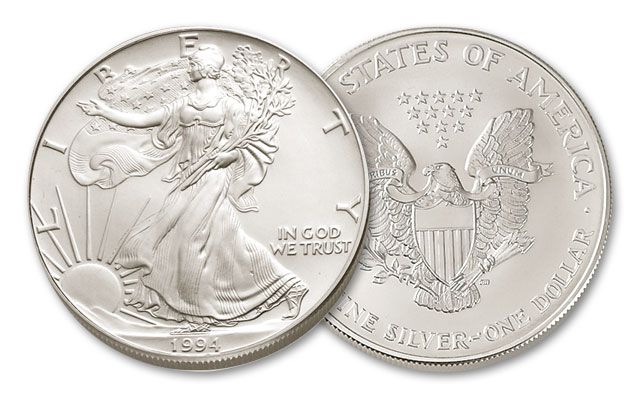 Availability: Out of Stock
Discontinued Product
Item #
228452
Add to Wish List Add to Wish List Wishlist is for registered customers. Please login or create an account to continue. Add to Compare
Product Description

America’s finest silver is displayed in all its glory with the 1994 American Eagle Silver Dollar. Every year savvy buyers stash these away. Each is struck in one ounce of 99.9% fine silver and is in affordable Brilliant Uncirculated (BU) condition.

Silver Eagles were created as a safe, convenient way for investors to add precious metal to their portfolios. Of course, they're highly collectible, too. The Silver Eagle is widely regarded as one of the most beautiful American coins ever struck, and many collectors seek to assemble a complete set by acquiring at least one Silver Eagle from each year in the series.

Proof Silver Eagles in 1994 are one of the most sought-after Silver Eagle proofs, due to that year's low mintage—the lowest mintage of standard proof Silver Eagles in the entire series. The beautiful and uncommon 1994 Proof Silver Eagle has a cameo finish, achieved by striking a highly burnished blank multiple times. The result is a soft, "frosted" effect on the raised elements of the design, an elegant contrast to the highly polished, mirror-like background field.

If your collection of Silver Eagles lacks the 1994 Silver Eagle bullion or proof coin, call us today and we'll help you complete your set. The overall average price of silver during 1994 was $5.28 per ounce.