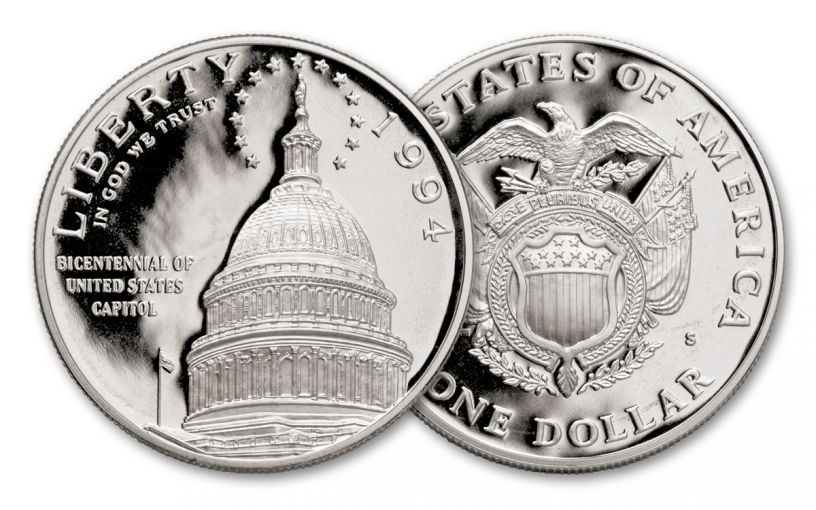 Availability: Out of Stock
This item is currently Out of Stock. Please sign up to be notified if this product becomes available.
Item #
225094
Add to Wish List Add to Wish List Wishlist is for registered customers. Please login or create an account to continue. Add to Compare

Celebrate the 200th Anniversary of Our Nation’s Capitol

When Congress was created by the Constitution of the United States in 1789, it had to have a place to meet. While the Constitution established the District of Columbia as the nation’s capitol, it would not be until 1793 that George Washington laid the cornerstone of what would go on to be the United States Capitol building, the nation’s most symbolically important and architecturally impressive building.

To commemorate the Bicentennial of the Capitol building in 1994, the U.S. Mint struck this fascinating silver dollar that presented a unique view of the U.S. Capitol building. Struck in 90% fine silver, this legal-tender coin features the Capitol building on the obverse designed by William C. Cousins. The design also shows a series of stars forming a halo around the Statue of Freedom that sits high atop the dome. The coin’s reverse was designed by John Mercanti and depicts the Arms of Congress as based on a stained glass window located near the grand staircases of the House and Senate. The design includes a Union Shield surrounded by an oak wreath, an American eagle holding arrows and olive branches in its talons, and four American flags.

Struck for one year and one year only at the San Francisco Mint, this shimmering Proof coin has a limited edition of just 279,579 proof coins. A popular commemorative both for its stirring images and its milestone bicentennial anniversary, it will make a stunning addition to your collection!

Pay tribute to the 200th anniversary of Capitol with the 1994 U.S. Capitol Bicentennial Commemorative Silver Dollar. Our supply is limited so click one to your cart today!