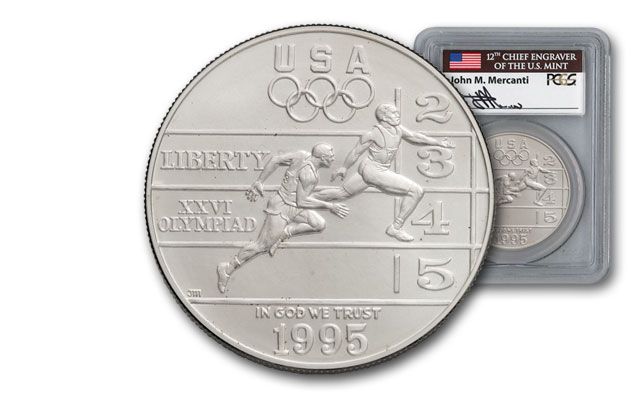 Availability: In Stock
This item will ship within 2 business days.
Item #
244836
Review this product
Add to Wish List Add to Wish List Wishlist is for registered customers. Please login or create an account to continue. Add to Compare
Complete your collection with one of these:
Product Description

This 1995 Track and Field Silver Dollar commemorative was struck at the Denver Mint to commemorate the 1996 Olympic Summer Games held in Atlanta, Georgia. It shows two sprinters running toward the finish line, and two hands clasped beneath the Olympic Torch. It's a one-year-only issue with an incredibly low Brilliant Uncirculated (BU) mintage of only 24,976 Silver Dollars. Each is struck in 26.73 grams of 90% silver. In addition to being a highly sought-after Olympic issue, it's also one of the very limited number of Silver Dollar commemoratives struck at the Denver Mint. This example grades Mint State-69 (MS69) by Professional Coin Grading Service (PCGS) and is hand signed by John Mercanti, 12th Chief Engraver at the U.S. Mint.
Product Details
Reviews
Write Your Own Review
Applied promo