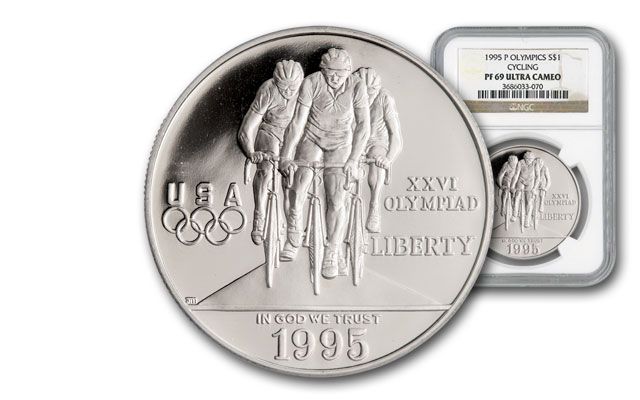 Availability: Out of Stock
This item is currently Out of Stock. Please sign up to be notified if this product becomes available.
Item #
246680
Add to Wish List Add to Wish List Wishlist is for registered customers. Please login or create an account to continue. Add to Compare

This 1995 Silver Dollar was minted in Philadelphia and struck to commemorate the Atlanta Summer Olympics in 1996. It features cycling and grades Professional Coin Grading Service (PCGS) or Numismatic Guaranty Corporation (NGC) Proof-69 (grading service varies). The 1996 Summer Olympics were held in Atlanta, GA and the athlete selected by the host country to run the final leg of the torch relay and light the Olympic Cauldron was Mohammed Ali.

The United States finished with the most gold medals(44) as well as the most silver medals (32) of any country that competed in the summer Olympics. The obverse features three cyclists in the center, surrounded by inscriptions XXVI Olympiad, Liberty, In God We Trust, 1995, and the Olympic rings with USA above, and it was designed by John Mercanti. The reverse shows two clasped hands beneath the Olympic torch and rings. Inscriptions include United States of America, E Pluribus Unum, Atlanta, and One Dollar. The reverse was designed by William Krawczewicz. This coin has one of the lowest mintages of modern silver dollar commemorative proofs with only 118,795 ever struck.