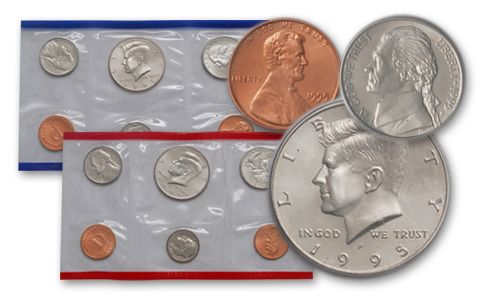 Availability: In Stock
This item will ship within 2 business days.
Item #
182917
Add to Wish List Add to Wish List Wishlist is for registered customers. Please login or create an account to continue. Add to Compare

In keeping with a declining trend in sales of U.S. Mint Sets, the 1995 set had (at the time) the lowest mintage of any set issued since 1964, making this a key to any Mint Set collection.

About the sets: The coins in the 1995-PD Mint Sets were Uncirculated pieces pulled from regular production runs, thus the quality of the individual coins varies widely from set to set, and even within a set.

The 1995-PD Mint Set contained ten coins, including the following:

Original packaging: The 1995-PD Mint Set consisted of two pliofilm packs. The first one contained the Philadelphia Mint coins and a Cent-sized token with a large "P" (for Philadelphia), while the second pack contained coins from the Denver Mint, plus a token with a large letter "D." The pack containing the D-Mint coins was edged in red; the pack containing the P-Mint coins was edged in blue. The two pliofilm packs and a card listing the specifications for each coins were then sealed in an officially inscribed envelope, which was imprinted with an image of a die being inspected.

American terrorists blew up the Alfred P. Murrah Federal Building in Oklahoma City, Oklahoma. O.J. Simpson was tried and acquitted on murder charges in what was billed as the "Trial of the Century." Louis Farrakhan organized the Million Man March on Washington, D.C.

In a historic rendezvous, American Space Shuttles visited the Russian Space Station Mir. France exploded a nuclear bomb in the Pacific, sparking worldwide protests. Mexico's economy was bailed out by a $20 billion infusion from the United States.