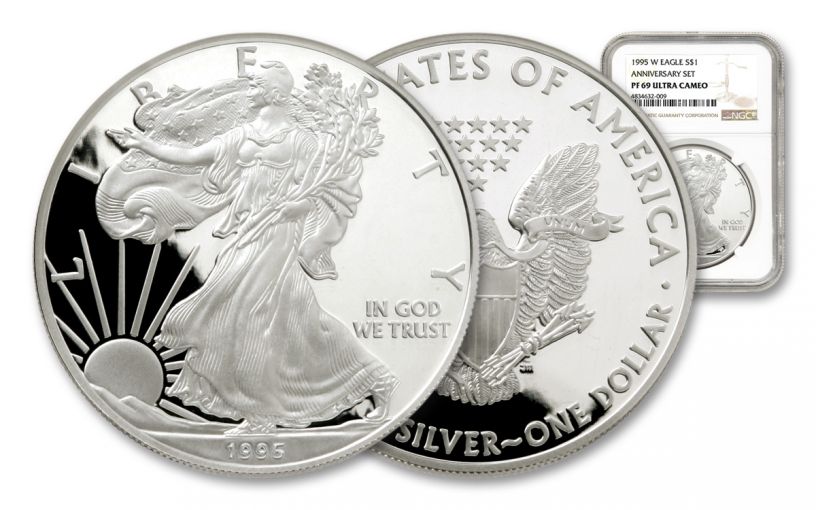 Availability: Call-In Only
This item is only available on a Call-In basis. Please call 1-800-510-6468 to speak to a representative.
Item #
340821
Add to Wish List Add to Wish List Wishlist is for registered customers. Please login or create an account to continue. Add to Compare

In the 30-plus years of the Silver Eagle series, one coin stands out as the most prized among collectors: the 1995-W Silver Eagle Proof. Struck with frosted devices and mirror-like fields, its visage is incredibly attractive to the eye – but that’s not the main reason for its coveted status. That honor belongs to its rarity.

What’s interesting to note about the 1995-W Silver Eagle is that it was intended simply as a bonus coin in the 10th Anniversary American Eagle Proof Set with the $5, $10, $25 and $50 Gold Proof Eagles. All Customers had to do to receive the coin was indicate on the order form that they wanted to receive it. Today, nearly a quarter of a century later, that “free” coin has surpassed the combined value of all the gold coins in the set!

Simply put, the 1995-W Silver Eagle Proof is the key release of the entire series. In fact, the Professional Coin Grading Service (PCGS) currently lists the 1995-W Silver Eagle as #13 on its list of 100 Greatest U.S. Modern Coins due to its low mintage and for being the first Silver Eagle to bear the “W” mintmark. Now you have the chance to secure one certified by the Numismatic Guaranty Corporation (NGC) as being in near-perfect Proof-69 Ultra Cameo (PF69UC) condition – a coin that appears flawless to the naked eye.

Rival collectors will be scrambling to secure this coin, so be sure you get to it first!

Don’t miss your opportunity to add this key-date American Silver Eagle to your collection. Click it to your cart now to avoid disappointment later!