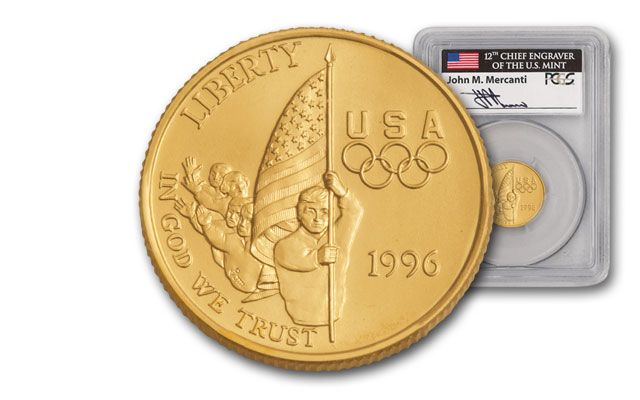 Availability: Out of Stock
This item is currently Out of Stock. Please sign up to be notified if this product becomes available.
Item #
244310
Add to Wish List Add to Wish List Wishlist is for registered customers. Please login or create an account to continue. Add to Compare

To commemorative the 1996 Olympics in Atlanta, GA, the U.S. Mint authorized the minting of 16 different coins to be sold over a period of two years, 1995-1996. With a mintage of only 9,174 pieces, this coin is one of the most sought after $5 commemoratives as a result of its ultra-low mintage. Each coin is graded by Professional Coin Grading Service (PCGS) in Proof-69 Deep Cameo (PR69DCAM) and includes a hand-signed signature from former 12th Chief Mint Engraver of the U.S. Mint John Mercanti on the label.

The Olympic Flag Bearer $5 Gold Coin features athletes from America bearing their country's flag as they enter the Olympic Stadium. The obverse inscriptions include "Liberty", "In God We Trust", and the date "1996". The USA Olympic logo also appears in the right field of the coin. The obverse was designed by Patricia L. Verani.

The reverse design of the coin features the mark of the Atlanta Committee for the Olympic Games. It is surrounded by laurel leaves to represent the laurel wreath that was awarded to Greek athletes during the original Olympic Games. The inscriptions read "United States of America", "Five Dollars", "Atlanta" and "E Pluribus Unum". The reverse was designed by William Krawczewicz and used for both of the $5 gold Olympic commemorative coins.

Each coin label is hand-signed by John Mercanti who was the 12th Chief Engraver at the U.S. Mint (as stated on the holder). Mercanti has produced more coin and medal designs than any employee in United States Mint history (more than 100). In addition to designing and sculpting a number of Congressional Gold Medals, Mercanti worked on quarters for the states of Arkansas, Iowa, North Carolina, Pennsylvania, and West Virginia for the 50 State Quarters Program.