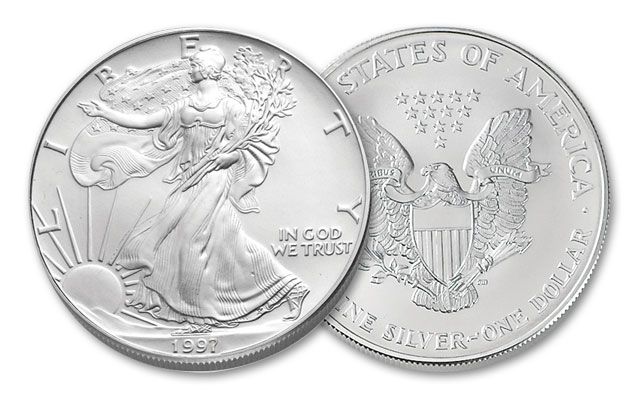 Availability: Out of Stock
Discontinued Product
Item #
227571
Add to Wish List Add to Wish List Wishlist is for registered customers. Please login or create an account to continue. Add to Compare

America’s finest silver is displayed in all its glory with the 1997 American Eagle Silver Dollar. Every year savvy buyers stash these away. Each is struck in one ounce of 99.9% fine silver and is in affordable Brilliant Uncirculated (BU) condition.

The U.S. Mint also trimmed the size of the proof mintage to the second fewest ever.

The 1997 Proof Silver Eagle was included in a new set offered by the U.S. Mint in 1997. As part of the launch of the new Platinum Eagle, the "Impressions of Liberty Set" included proof coins from Gold Eagle, Silver Eagle and Platinum Eagle mintages. Only 5,000 sets were produced.

No matter the size of the mintage, you can purchase American Silver Eagle coins with the assurance that they're backed by the United States Government. Silver Eagles are the only silver bullion coin certified by the U.S. Government for purity, content and weight. And as legal tender, they are eligible for investment in an Individual Retirement Account (IRA).

In short, 1997 American Silver Eagles are one of the most convenient, safest and secure ways to invest in precious metals.