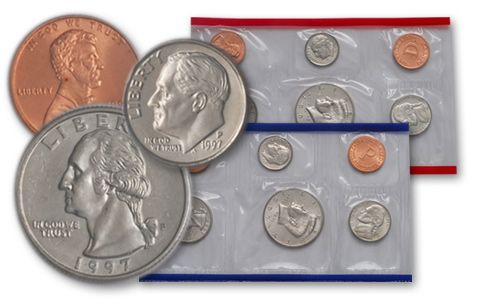 Availability: In Stock
This item will ship within 2 business days.
Item #
182919
Add to Wish List Add to Wish List Wishlist is for registered customers. Please login or create an account to continue. Add to Compare

With no extra Dime (as in the 1996-PDW Mint Set), the public had no incentive to purchase 1997 Mint Sets. As a result, the mintage dropped to below 1 million sets for the first time since 1963! Today, these sets represent one of the best values and bargains in numismatics.

About the sets: The coins in the 1997-PD Mint Sets were Uncirculated pieces pulled from regular production runs, thus the quality of the individual coins varies widely from set to set, and even within a set.

The 1997-PD Mint Set contained ten coins, including the following:

Original packaging: The 1997-PD Mint Set consisted of two pliofilm packs. The first one contained the Philadelphia Mint coins and a Cent-sized token with a large "P" (for Philadelphia), while the second pack contained coins from the Denver Mint, plus a token with a large letter "D." The pack containing the D-Mint coins was edged in red; the pack containing the P-Mint coins was edged in blue. The two pliofilm packs and a card listing the specifications for each coins were then sealed in an officially inscribed, light blue mailing envelope.

The spacecraft Mars Pathfinder and Sojourner landed on Mars and spent three months collecting data and images from the Red Planet. The blockbuster movie Titanic burst onto the silver screen.

Hong Kong reverted back to Chinese control. Princess Diana of England was killed in a tragic car accident.