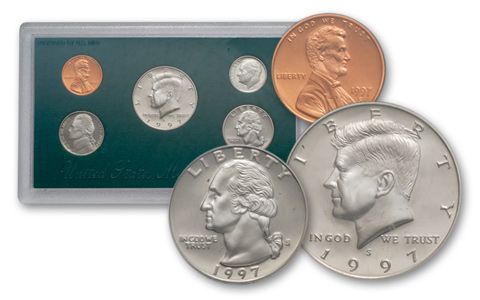 Availability: In Stock
This item will ship within 2 business days.
Item #
222266
Add to Wish List Add to Wish List Wishlist is for registered customers. Please login or create an account to continue. Add to Compare

Finally, after several years of decline, sales of Proof Sets perked back up in 1997, coming close to the 2 million mark. Surprisingly, the 1997-S Proof Set sells for three times the 1996-S Proof Set, even though the 1996-S Proof Set is scarcer. 1997 was the last year of the Prestige Set, which had suffered a serious loss of popularity over the years.

About the sets: All coins in the 1997-S Proof Set were intended to have a Cameo or Deep Cameo Finish.

Original packaging: The coins of the 1997-S Proof Set were placed in individual holes in a green-colored, textured paper and cardboard insert, then sealed in a two-piece, clear plastic case. The case was then inserted, along with a Certificate of Authenticity, into a protective outer cover consisting of green cardboard imprinted with the silver and somewhat confusing words: "United States Mint Proof Set • 1997." The new collector might ask, "Is this a Mint Set or a Proof Set?"