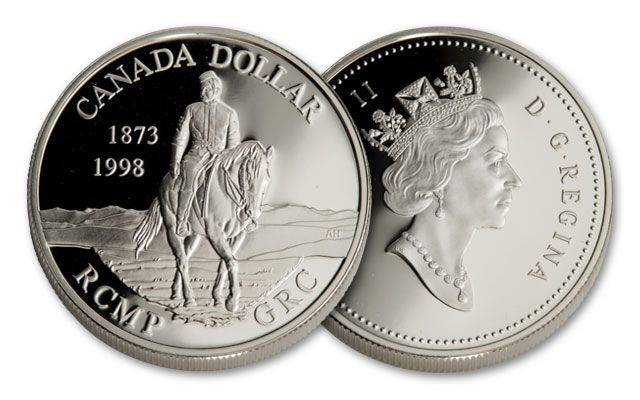 Availability: Out of Stock
This item is currently Out of Stock. Please sign up to be notified if this product becomes available.
Item #
286199
Add to Wish List Add to Wish List Wishlist is for registered customers. Please login or create an account to continue. Add to Compare
Product Description

In 1873, the Royal Canadian Mounted Police was established to bring law, order and Canadian authority to the Western frontier. This silver dollar commemorates the 125th Anniversary of this organization.

The proof is struck in 25.175 grams of 92.5% Sterling Silver. The Obverse design features the front of the coin you will see the effigy of Queen Elizabeth II with "ELIZABETH II" behind her head on the left. Elizabeth II to the right reads: D.G REGINA. The Reverse design features a Mounty officer in uniform. On the left side of the horse and officer are the dates 1873 and 1998. Atop of the portrait reads: CANADA DOLLAR. The bottom of the coin reads: RCMP (The Royal Canadian Police). On the bottom left reads: GRC (Gendarmerie Royale du Canada).

The picture on the back of the coin is of a Mounty officer in the original uniform. By the late 1980's, the Royal Canadian Mounted Police (RCMP) had grown to have 18,000 members.