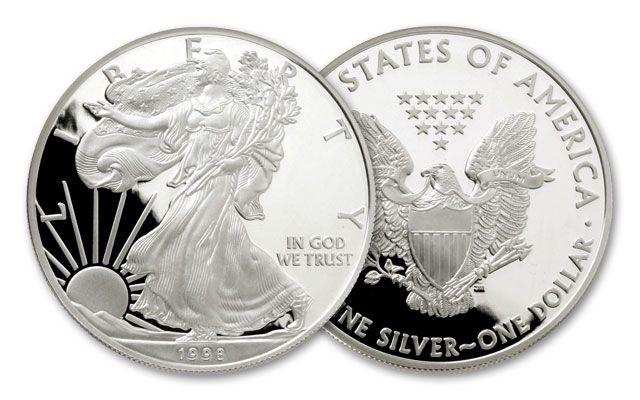 Availability: Out of Stock
This item is currently Out of Stock. Please sign up to be notified if this product becomes available.
Item #
227583
Add to Wish List Add to Wish List Wishlist is for registered customers. Please login or create an account to continue. Add to Compare

America’s finest silver is displayed in all its glory with the 1998 American Eagle Silver Dollar. Every year savvy buyers stash these away. Each is struck to stunning Proof condition in one ounce of 99.9% fine silver.

About the 1998 American Silver Eagle:
Silver Eagles minted in 1998 were produced during a year that saw the price of silver shoot up to a high of $7.81 per ounce in February, only to drop precipitously to $4.69 per ounce by December. By year's end, the U.S. Mint had sold nearly 5 million 1998 Silver Eagle bullion coins and 450,000 1998 Proof Silver Eagles.

The 1998 Silver Eagle bullion coin features the series' beautiful "Walking Liberty" design, an image inspired by the original art on the "Walking Liberty" half dollar, which was minted in the U.S. from 1917 to 1947. The reverse face on the Silver Eagle shows a bald eagle bearing a shield and carrying a sheaf of arrows and an olive branch, with "E PLURIBUS UNUM" ("Out of many, one") inscribed on a banner held by its beak. In the solid field above its head are 13 stars, representing the original 13 colonies.