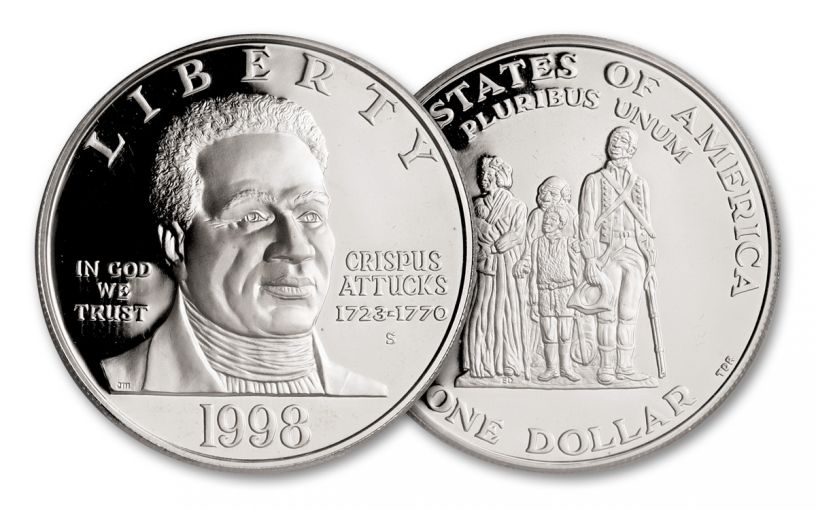 Availability: Out of Stock
This item is currently Out of Stock. Please sign up to be notified if this product becomes available.
Item #
242424
Add to Wish List Add to Wish List Wishlist is for registered customers. Please login or create an account to continue. Add to Compare

The Boston Massacre was one of the key flashpoints that helped touch off America’s Revolution against Great Britain. The incident occurred on March 5, 1770 in front of Boston’s Old State House when British troops fired on a mob of angry colonists, killing 5 people and wounding six. Eye witnesses agreed that the first person killed by the British troops was a 47-year-old African-American dock worker named Crispus Attucks. His crumpled and bleeding body soon became an important symbol for patriotism and was later used a symbol for the abolition of slavery leading up to the Civil War.

In 1998, to honor the 275th anniversary of Attucks’ birth, the U.S. Mint released this commemorative silver dollar. Struck in 90% silver, the legal-tender coin features a portrait of Crispus Attucks designed by John Mercanti. The coin’s reverse was designed by Ed Dwight and shows a detail from the proposed Black Patriots Memorial.

Pay tribute to the life of Patriot Crispus Attucks with the 1998-S $1 Black Revolutionary War Patriots Silver Commemorative Proof. Click one to your cart today!