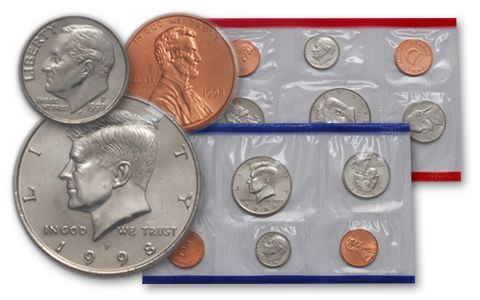 Availability: In Stock
This item will ship within 2 business days.
Item #
182920
Add to Wish List Add to Wish List Wishlist is for registered customers. Please login or create an account to continue. Add to Compare

Mint Set sales rebounded slightly in 1998, jumping back over the 1 million mark, thanks to the increased demand for the last of the original Washington Quarter design.

About the sets: The coins in the 1998-PD Mint Sets were Uncirculated pieces pulled from regular production runs, thus the quality of the individual coins varies widely from set to set, and even within a set.

The 1998-PD Mint Set contained ten coins, including the following:

Original packaging: The 1998-PD Mint Set consisted of two pliofilm packs. The first one contained the Philadelphia Mint coins and a Cent-sized token with a large "P" (for Philadelphia), while the second pack contained coins from the Denver Mint, plus a token with a large letter "D." The pack containing the D-Mint coins was edged in red; the pack containing the P-Mint coins was edged in blue. The two pliofilm packs and a card listing the specifications for each coins were then sealed in an officially inscribed light blue mailing envelope.

Titanic became the most financially successful movie of all time, and captured 11 Academy Awards. The U.S. House of Representatives impeached President Clinton. Senator John Glenn returned to space at the age of 77.