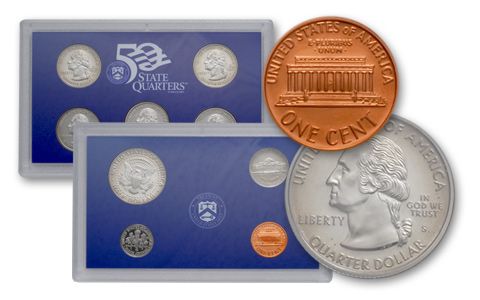 Availability: In Stock
This item will ship within 2 business days.
Item #
222268
Add to Wish List Add to Wish List Wishlist is for registered customers. Please login or create an account to continue. Add to Compare

1999 saw the introduction of the 50 States Quarters; a ten-year program that presents five new Quarters each year, representing each of the different American States in the order in which they were added to the Union. The inclusion of the five new States Quarters in the Proof Sets of the year boosted sales to the 2.5 million dollar mark, which was a significant increase over the prior year, despite an almost 60 percent increase in the issue price.

Original packaging: The 1999-S Proof Set comes in two cases. One case contains the Cent, Nickel, Dime, and Half Dollar; the other case contains the year's five 50 States Quarters. The coins are inserted into holes in a cardboard holder with a blue-colored flag design (to distinguish it from the red-colored flag design of the Silver Proof Sets), then sealed inside a two-piece, clear plastic case. The cases and certificates of authenticity were inserted into a colorful, card-stock box with the head of the Statue of Liberty printed on the left side.