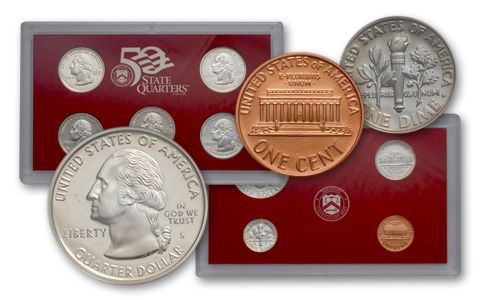 Availability: In Stock
This item will ship within 2 business days.
Item #
222603
CC Payments as low as
$89.98 / month
Add to Wish List Add to Wish List Wishlist is for registered customers. Please login or create an account to continue. Add to Compare

In 1999, the U.S. Mint released the very first State Quarters in what ultimately became the most popular series in U.S. coin history. Over 130 million Americans collected State Quarters, but very few of those have this first-ever nine-coin Silver Proof Set, which includes the first quarters: Delaware, Pennsylvania, New Jersey, Georgia and Connecticut. The set also includes a proof silver dime, quarter and half, and the proof Lincoln Cent and Jefferson Nickel. We recently found a small cache of these first-ever set in original mint packaging and struck at the San Francisco Mint. Millions of State Quarter collectors missed it. Here's your chance to secure it - but call before they're gone!