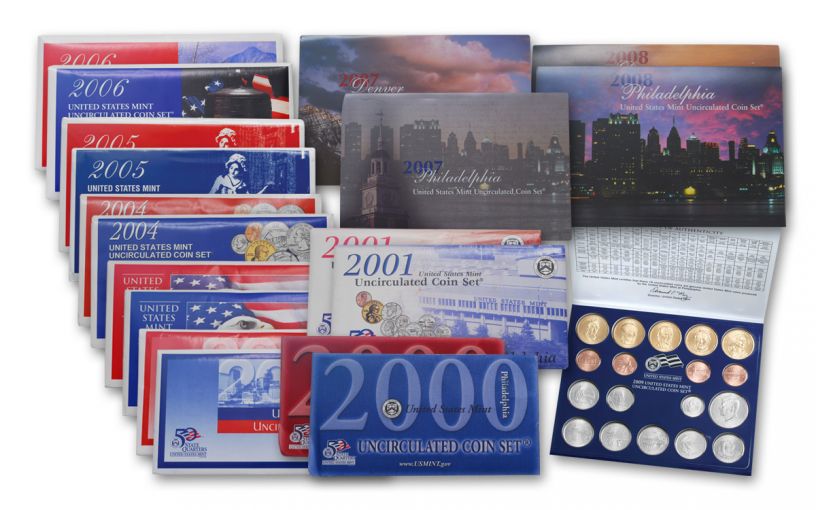 Availability: Out of Stock
This item is currently Out of Stock. Please sign up to be notified if this product becomes available.
Item #
303477
Add to Wish List Add to Wish List Wishlist is for registered customers. Please login or create an account to continue. Add to Compare

An Entire Decade of U.S. Coins in One Shot!

The Fun of Collecting is in the Journey, But Sometimes . . .

A good part of the fun in coin collecting comes in the chase. Going to coin shows, examining collections, surfing for deals -- it all makes finding that one coin or completing your favorite series all the more thrilling! But, let's face it. Sometimes, the journey can get a little exhausting. It's nice to be able to spend less time on the hunt and more time enjoying the art and history of your collection. You want your instant gratification and you want it NOW. Fortunately, our buyers have been able to gather several every single U.S. Mint set from the 2000s and put them together in one incredible set!

All that, plus the standard Lincoln Cents, Jefferson Nickels, Roosevelt Dimes, and Kennedy Half-Dollars you've come to love! Each set features Brilliant Uncirculated (BU) Philadelphia Mint-struck and Denver Mint-struck coins from the decade.

A Collection for the Ages, A Great Way to Save!

Totaling 236 coins in all, all 10 proof sets will arrive together in a special black storage case. The fact that you can get all of these coins together in one wide-ranging collection is extraordinary enough. However, just take a look at the value. When you see how much you save over buying these sets individually, you'll want to make this part of your collection ASAP! So, don't wait -- complete several collections at once with a single "add to cart" click now!