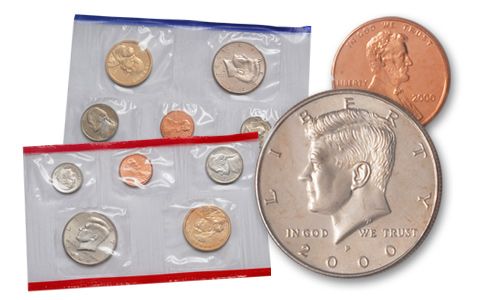 Availability: In Stock
This item will ship within 2 business days.
Item #
182922
Add to Wish List Add to Wish List Wishlist is for registered customers. Please login or create an account to continue. Add to Compare

Orders for the 2000-PD Mint Sets were limited to 1.5 million sets - a goal that came very close to being reached.

About the sets: The coins in the 2000-PD Mint Sets were Uncirculated pieces pulled from regular production runs, thus the quality of the individual coins varies widely from set to set, and even within a set.

The 2000-PD Mint Set contained twenty coins, including the following:

About the sets: Beware: the full 2000-PD Mint Sets contain 18 coins. Because the P- and D-Mint coins were packaged separately, they are sometimes sold separately. While it may seem obvious that each envelope is only half of the set, many new collectors have purchased single envelopes at the retail price for a full set!

Mexicans elected former Coca-Cola executive, Vicente Fox, as their President. Terrorists crippled the U.S. naval destroyer, Cole, with a massive explosion while it was docked in Yemen. The Presidents of North and South Korea signed a peace accord.