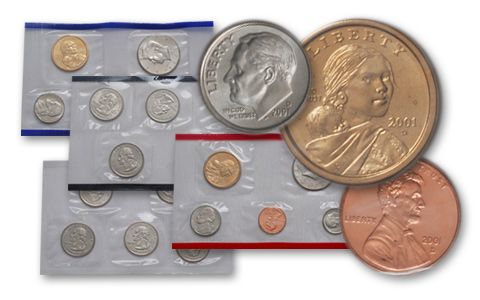 Availability: In Stock
This item will ship within 2 business days.
Item #
182923
Add to Wish List Add to Wish List Wishlist is for registered customers. Please login or create an account to continue. Add to Compare

About the sets: The coins in the 2001-PD Mint Sets were Uncirculated pieces pulled from regular production runs, thus the quality of the individual coins varies widely from set to set and even within a set.

The 2001-PD Mint Set contained twenty coins, including the following:

One example of each of the following Quarters from the Philadelphia and Denver Mints: New York Quarter, North Carolina Quarter, Rhode Island Quarter, Vermont Quarter and Kentucky Quarter (all Copper-Nickel Clad).

About the sets: According to the Mint, "These coins are struck on special uncirculated coin presses with special quality enhancements such as slightly higher coining force, early strikes from dies…."

Terrorists destroyed the two towers of the World Trade Center. U.S. Senator Jim Jeffords of Vermont left the Republican party and became an Independent, shifting power in the Senate to the Democrats. Anthrax was found in the U.S. Mail. The movie Gladiator won the Academy Award for Best Picture.

America launched Operation Enduring Freedom to remove the Taliban from power in Afghanistan. In two months, the Taliban regime collapsed. Ariel Sharon was elected Prime Minister of Israel; by the end of the year, Israel cut ties with Palestinian President, Yasser Arafat.