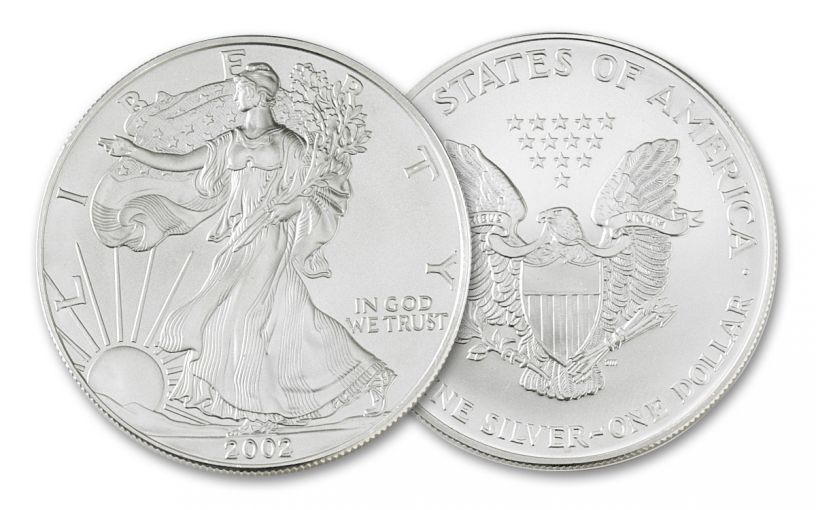 Availability: Out of Stock
Discontinued Product
Item #
227749
Add to Wish List Add to Wish List Wishlist is for registered customers. Please login or create an account to continue. Add to Compare

Unless you’re new to the coin-collecting hobby or you’ve been living under a rock for the past year, perhaps you haven’t heard about the United States Mint’s plan to change the reverse design of its One-Ounce Silver Eagles beginning in 2021. That’s right, the beloved design that has graced the world’s most popular silver coin since its debut in 1986 is undergoing a facelift that’s already turning the numismatic world on its head. The news that the design was coming to an end is a major event, creating a demand for back-dated Silver Eagles, including this high-grade 2002 beauty that’s just itching to find its way into your collection!

The American Eagle Silver Dollar, better known as the Silver Eagle, is possibly the most collected silver dollar in the world. It’s government-guaranteed 99.9% purity, legal-tender value and one-ounce silver content go a long way with silver stackers and collectors alike. It pairs Adolph A. Weinman’s iconic Walking Liberty Half-Dollar design that was issued from 1916 to 1947 on the obverse with John Mercanti’s Heraldic Eagle on the reverse that was specially created for the Silver Eagle program. Plus, each coin available in this offer comes in original Brilliant Uncirculated (BU) condition with razor-sharp details that are as fresh and crisp as the day they left the mint

This date carries a relatively small mintage of just 10.5 million coins. Compare that to 2016, when nearly 38 million were struck! These coins all hail from a “Monster Box” of 500 coins. When they’re gone, they’ll be gone for good. Order yours now and avoid disappointment later!

Don’t miss your chance to secure a key-date back-dated 2002 American Silver Eagle graded by NGC in near- perfect Uncirculated Mint State-70 condition. Click it to your cart today!