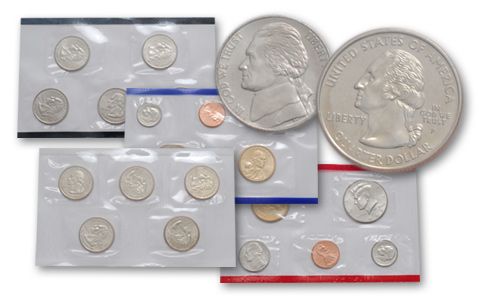 About the sets: The coins in the 2002-PD Mint Sets were Uncirculated pieces pulled from regular production runs, thus the quality of the individual coins varies widely from set to set and even within a set.

The 2002-PD Mint Set contained twenty coins, including the following:

There is one example of each of the following from the Philadelphia and Denver Mints: Tennessee Quarter, Ohio Quarter, Louisiana Quarter, Indiana Quarter, and Mississippi Quarter (all Copper-Nickel Clad).

About the sets: According to the Mint, "These coins are struck on special uncirculated coin presses with special quality enhancements such as slightly higher coining force, early strikes from dies…."

The Winter Olympics were held in Salt Lake City, Utah in February. About 2,400 athletes from 78 countries participated. The U.S. won 10 gold, 13 silver and 11 Bronze medals. The first detainees arrive in Camp X-Ray at Guantanamo Bay, Cuba. The Angels defeated the Giants in Game 7 to win the World Series.