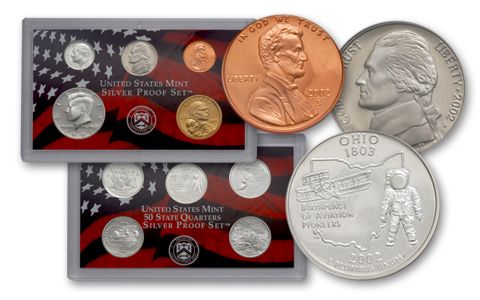 Availability: In Stock
This item will ship within 2 business days.
Item #
222606
Review this product
Add to Wish List Add to Wish List Wishlist is for registered customers. Please login or create an account to continue. Add to Compare
Complete your collection with one of these:
Product Description

Did you know that modern U.S. Mint Silver Proof Sets owe their existence to a fire? It's true! A fire at the U.S. Mint in Philadelphia in 1817 destroyed much of the mint's equipment. It was replaced with new "high tech" minting equipment from Europe, which allowed the mint to strike coins several times, and to make proofs. Well, over the next several years, the Mint employees were like kids in a candy shop, striking proof coins to show off their skills and the new-fangled equipment. But, they didn't sell these coins to collectors. They kept them in their own "Mint Cabinet." Many of these coins eventually ended up at the Smithsonian Institution, where they are now part of our treasured national coin collection. Later in the 19th century, the mint began striking proof coins to order, and starting in 1936, they began selling complete proof sets. Since then, the historic U.S. Silver Proof set series has grown to become one of our most popular issues each year. Each set includes the Lincoln Cents, Jefferson Nickels, Silver Roosevelt Dimes, Silver Washington Quarters, Silver Washington Statehood Quarters, Silver Kennedy Half Dollars and golden Sacagawea Dollars from the year they were issued. Every set comes in it's original U.S. Mint packaging. If you already have a few of these sets, here's your chance to complete your collection.