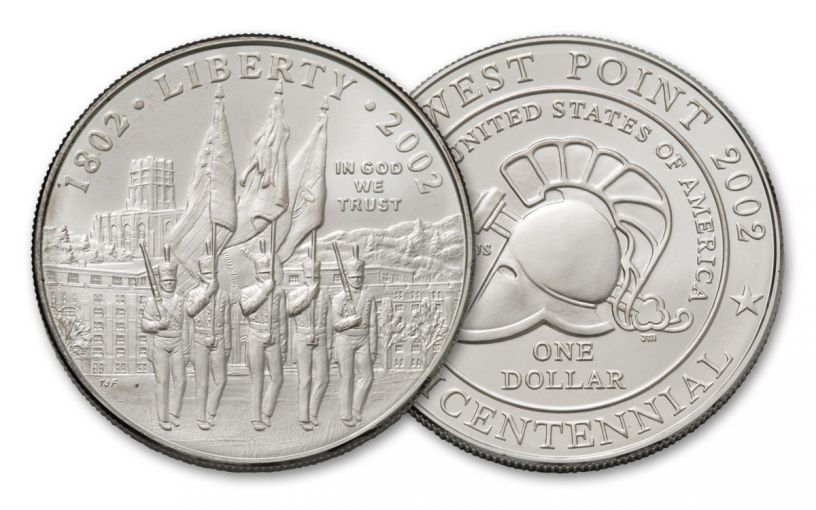 Availability: In Stock
This item will ship within 2 business days.
Item #
184377
Add to Wish List Add to Wish List Wishlist is for registered customers. Please login or create an account to continue. Add to Compare

Anyone fortunate enough to witness the cadets marching smartly in their gray uniforms on the parade grounds at the United States Military Academy in West Point, New York soon learns what the tradition of “The Long Gray Line” means. As expressed affectionately by West Pointers, the phrase refers to the unique bond shared by West Point graduates past, present and future and their dedication to the motto “Duty, Honor, Country” that has remained unchanged since the earliest days of the institution’s founding.

Each coin was also beautifully struck in highly pure 90% fine silver and features designs that could not be mistaken for anything other than West Point. The obverse features the Academy Color Guard in Parade and the reverse shows the West Point Bicentennial logo. Only slightly more than 100,000 of these vibrant and patriotic coins were ever struck and each one available in this offer comes in original Brilliant Uncirculated (BU) condition, as fresh, crisp and smart as the day it left the mint.

West Point and The Long Gray Line is an integral component of America’s finest traditions. This hallowed institution has produced generations of standout American leaders, two U.S. presidents, countless generals & leaders of industry, and thousands of graduates who have gone on to lead our Army’s soldiers as young officers. This coin succinctly sums up all of that pageantry and tradition and is sure to make its mark in your collection!

Pay tribute to The Long Gray Line today by reserving one of these outstanding 2002-W West Point Bicentennial Silver Dollars for your collection.