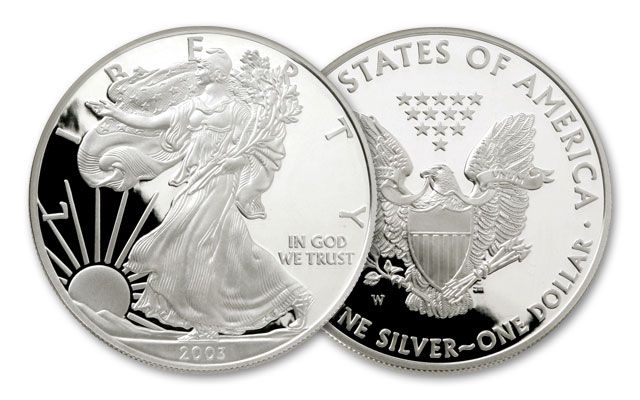 Availability: In Stock
Discontinued Product
Item #
227578
Add to Wish List Add to Wish List Wishlist is for registered customers. Please login or create an account to continue. Add to Compare

America’s finest silver is displayed in all its glory with the 2003 American Eagle Silver Dollar. Every year savvy buyers stash these away. Each is struck to stunning Proof condition in one ounce of 99.9% fine silver.

About the 2003 American Silver Eagle:
The year 2003 was the 17th year of the popular American Eagle Bullion Program, the Act of Congress that created the Silver Eagle coin. Until this year, mintages of the Silver Eagle bullion coin had grown upwards of 10 million, but 2003 saw production dip significantly.

The front face of the 2003 Silver Eagle bears the image of "Walking Liberty" by American sculptor Adolph A. Weinman. The reverse image is based on the Great Seal of the United States and shows a bald eagle in a heraldic pose, accompanied by a shield, banner, olive branch and sheaf of arrows.

Like all other Silver Eagles, 2003 Silver American Eagles are guaranteed by the U.S. Government for weight, content and purity. And unlike most bullion coins, American Silver Eagles are non-reportable, making them one of the most secure, liquid and convenient way to own pure silver.