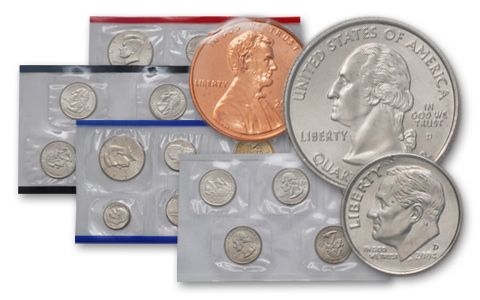 Availability: Available for Order
This item will ship 07/21/21
Item #
182926
Add to Wish List Add to Wish List Wishlist is for registered customers. Please login or create an account to continue. Add to Compare

About the sets: The coins in the 2004-PD Mint Sets were Uncirculated pieces pulled from regular production runs, thus the quality of the individual coins varies widely from set to set and even within a set.

The 2004-PD Mint Set contained twenty-two coins, including the following:

One example of each of the following from the Philadelphia and Denver Mints: Michigan Quarter, Florida Quarter, Texas Quarter, Iowa Quarter, and Wisconsin Quarter (all Copper-Nickel Clad).

About the sets: The 2004-PD Mint Set is notable for the fact that it contains two commemorative Jefferson nickels. In commemoration of the Louisiana Purchase, and Lewis and Clark's expedition, the President enacted Public Law 108-15 to modify the Jefferson Nickel in 2004 and 2005 in order to reflect images evocative of their historic expedition into the Louisiana Territory. Officially named the Westward Journey Nickel Series™, the law stipulated that a depiction of Monticello return to the nickel after two years, in 2006. The obverse continued to bear the likeness of President Jefferson, although using two new profiles for the 2005 and 2006 nickels. The two commemorative reverses issued for 2004 are the Louisiana Purchase design adopted from a historic Jefferson Peace Medal, and the Keelboat design which features a side view of a the keelboat that transported members of the Lewis & Clark expedition through the rivers of the Louisiana Territory in search of a northwest passage to the Pacific Ocean.

The U.S.-led coalition occupying Iraq transfers sovereignty to an interim Iraqi government. The U.S. competes at the Summer Olympics in Athens, Greece, and wins 36 gold, 39 silver and 27 bronze medals. A videotape of Osama Bin Laden speaking airs on Arabic TV, in which he threatens terrorist attacks on the USA, and taunts the President George W. Bush over the September 11th Terrorist attacks.