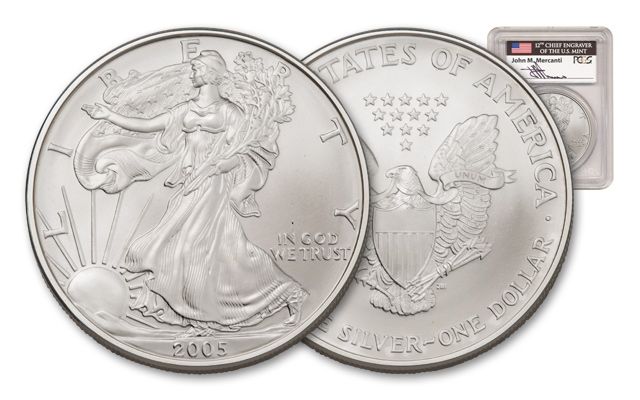 Availability: Out of Stock
This item is currently Out of Stock. Please sign up to be notified if this product becomes available.
Item #
250002
Add to Wish List Add to Wish List Wishlist is for registered customers. Please login or create an account to continue. Add to Compare
Product Description

Since their debut in 1986, American Eagle Silver Dollars have been the favorite of millions. As each new year dawns, hoards of silver enthusiasts and collectors eagerly await the release of the first coins bearing the new date. Collectors always love 'Firsts'. (More about that in just a minute!)

As the U.S. Mint releases American Silver Eagles, they place them in large green 'Monster Boxes' bearing the U.S. Treasury Department seal. Each Monster Box contains exactly 500 silver dollars. The Mint then adds a security sealing strap to each Monster Box, and labels them with a sequential box number to show the order in which the coins left the mint.

This unassuming government label isn’t very fancy. It’s downright boring to the untrained eye. But in this particular case, the label proved to be the key to unlocking a ten-year-old mystery—revealing a pedigree that our buyers never expected to find!

Hidden for a Decade
What was this mysterious pedigree? Well, at a recent coin show, two of our most experienced coin buyers were meeting with a dealer to secure more great U.S. coins for our customers. After more than an hour of examining stacks of classic gold coins and vintage dollars, their attention was caught by the glimpse of a green monster box nearly obscured under a pile of packing crates and boxes. Reaching down and hoisting the 35-pound box with a grunt, they saw that it was still sealed with the U.S. Mint strap. Setting it on a table and leaning down to read the label, they saw that it bore the date 2005. But it was another number that made the buyers gasp…

The box number on the label was low. REALLY low!

Even for coin experts who have forty-three years of experience between them, it took a moment for the significance to sink in. They were holding a sealed U.S. Treasury box of 500 American Eagle Silver Dollars, whose label clearly proved that they were among the very first coins struck in 2005—nearly ten years ago!

First Strikes Take the Collecting World by Storm
Collectors have eagerly sought out the First Strike pedigree ever since professional coin grading services began to award it to certified coins, which began right around the time these coins were struck in 2005. Both of the major coin grading services generally reserve this pedigree only to new coins submitted for grading within the first 30 days after their release from the mint. But in those rare cases where someone is lucky enough to submit a sealed U.S. Treasury monster box of Silver Eagles whose label proves that they were among the first coins released that year, these coins can claim the prestigious First Strike certification—even years after they were minted!

That's exactly what happened in this case. Our buyers immediately bought the entire sealed box of 2005 American Eagle Silver Dollars and submitted the entire box to Professional Coin Grading Service (PCGS) – one of the top coin grading and certification services in the world. After examining each of the 500 coins in the box under magnification, the graders were impressed with the quality of these First Strike coins. A significant number of the coins were found to reveal absolute perfectly-struck details and flawless surfaces. They were given the ultimate collector grade of Mint State 70 (MS70). And because of their indisputable government proof, they were also awarded the First Strike pedigree.

Back to the Future
Because PCGS First Strike certification was still quite new, very few 2005 Silver Eagles bore this pedigree before our amazing monster box revelation. How few? Well, over 8.891 MILLION Silver Eagles were struck in 2005. But prior to grading the coins preserved in our recently uncovered monster box, a mere 447 coins from 2005 bore the PCGS First Strike label. Today, thanks to our 'back to the future' discovery, we are now able to give subscribers an incredible chance to lock in genuine 2005 American Eagle Silver Dollars officially certified to be First Strike coins!

The Value of Pedigree and Perfection
Collectors always chase after top quality. And in the world of coins, a Mint State 70 grade is the pinnacle of quality and flawless perfection. But collector's also love 'firsts' – and when a perfect graded coin also bears the First Strike pedigree—it can supercharge demand.

SPECIAL BONUS: Exclusive Autograph!
We were so thrilled by our discovery of this sealed monster box from 2005 that we shared the story with the man who actually designed the coin – former Chief Engraver of the U.S. Mint, John Mercanti. As the designer of the American Eagle depicted on this coin, Mr. Mercanti's initials JM have proudly appeared on every Silver Eagle ever struck – that's over 300 Million coins!

But while his initials appear on every coin, only a very elite few have ever borne his autograph. To forever mark the amazing discovery of these nearly lost 2005 First Strike Silver Dollars, Mr. Mercanti agreed to personally autograph the label for each and every coin found within that box. Your perfect grade 2005 MS70 First Strike Silver Eagle also features Mr. Mercanti's actual autograph sealed within the archival PCGS holder. It will forever mark this coin as something special and unique within any collection.