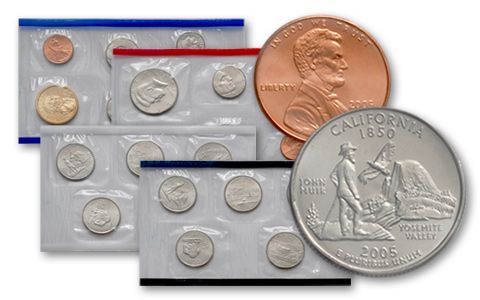 Availability: In Stock
This item will ship within 2 business days.
Item #
182927
Review this product
Add to Wish List Add to Wish List Wishlist is for registered customers. Please login or create an account to continue. Add to Compare
Complete your collection with one of these:
Product Description

About the sets: The coins in the 2005-PD Mint Sets were Uncirculated pieces pulled from regular production runs, thus the quality of the individual coins varies widely from set to set and even within a set.

The 2005-PD Mint Set contained twenty-two coins, including the following:

One example of each of the following from the Philadelphia and Denver Mints: California Quarter, Minnesota Quarter, Oregon Quarter, Kansas Quarter, and West Virginia Quarter (all Copper-Nickel Clad).

About the sets: The 2005-PD Mint Set continues the second year of the Westward Journey Nickel Series™ with two Jefferson Nickels issued in commemoration of the Louisiana Purchase and Lewis and Clark's expedition. The obverse bears a newly-designed, one-year-only portrait of President Jefferson, officially entitled: "President Jefferson with Handwritten Liberty". The two commemorative reverses issued for 2005 are an American Bison design reminiscent of the classic Buffalo Nickel, and a design of the Oregon coastline bearing the legend: "Ocean in view! O! The joy!". The inscription reflects an excited entry in the journal of Captain William Clark on November 7, 1805 as the expedition finally reached their goal of the Pacific Ocean.

North Korea announces that it possesses nuclear weapons as a protection against the hostility it feels from the United States. A hand grenade lands about 100 feet (30 m) from President George W. Bush while he is giving a speech to a crowd in Tbilisi, Georgia, but the explosive malfunctions and does not detonate. Lance Armstrong wins a record 7th straight Tour de France before his scheduled retirement. He is later disqualified from each of those races.