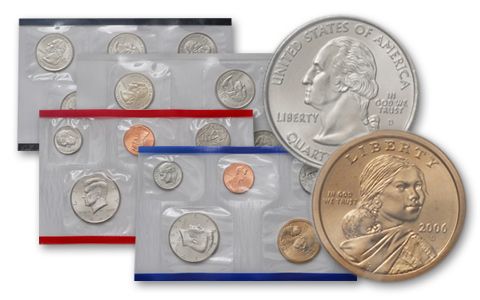 Availability: Available for Order
This item will ship 07/21/21
Item #
182928
Add to Wish List Add to Wish List Wishlist is for registered customers. Please login or create an account to continue. Add to Compare

About the sets: The coins in the 2006-PD Mint Sets were Uncirculated pieces pulled from regular production runs, thus the quality of the individual coins varies widely from set to set and even within a set.

The 2006-PD Mint Set contained twenty-two coins, including the following:

About the sets: The 2006-PD Mint Set is highly collectible as it was the last year that Mint Sets featured Mylar® packaging to contain the coins. Beginning in 2007, the U.S. Mint packaged annual Mint Sets in two "blister pack" folders, rather than using Mylar packages within envelopes.

The Blu-ray Disc format is released in the United States. Vice President Dick Cheney accidentally shoots and wounds a lawyer while quail hunting in southern Texas. Gerald Ford, 38th President of the United States from 1974 till 1977, passed on December 26th. Google buys YouTube for $1.65 billion. The St. Louis Cardinals defeat the Detroit Tigers to win their 10th world series.

The United States compete at the Winter Olympics in Turin, Italy and win 9 gold, 9 silver, and 7 bronze medals. London Metropolitan Police make 21 arrests in connection to an apparent terrorist plot that involved aircraft traveling from the United Kingdom to the United States. Liquids and gels are banned from checked and carry-on baggage.